Lots of people who enter the world of loose leaf tea are stunned, or even overwhelmed by the expanse of flavours and styles available from the Camellia sinensis tea plant. But I always find it especially exciting to see people discover oolong teas for the first time – the tea category that bridges the gap between the more commonly appreciated green and black teas. 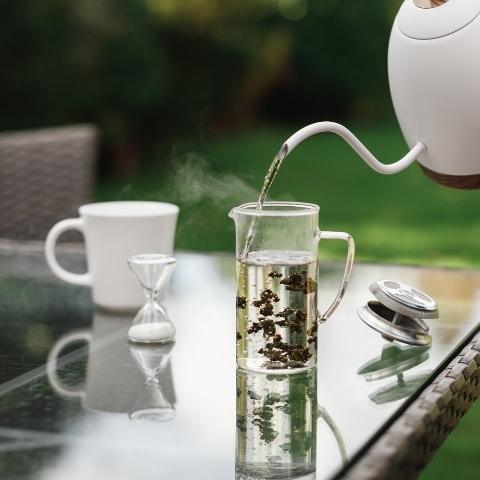 Oolong teas have a very broad selection of tastes and can offer some of the most adventurous flavour experiences out there.

Our Ali Shan is grown in Chenjia Garden on the west side of Ali Mountain National Park in Meishan township, Taiwan.

If you’ve never heard of oolongs, in very basic terms, oolong is a type of tea that is partially oxidised - that means that the leaves have been subject to some concentration of flavour. This is unlike green teas which are made from heating the fresh leaves very quickly after they have been picked and withered and thereby locking in their fresh, bright spring flavours; and at the other end of the scale, black teas which are rolled and bruised after they've been picked, so that oxygen gets inside them and fully concentrates their flavours - turning the leaves from a bright green to the deep red colour. The oolong category has very broad selection of tastes and offers some of the most adventurous flavour experiences out there, from fruity to creamy to floral and even roasted.

When diving into the oolong tea type, it’s inevitable that new tea explorers will stumble upon the small island of Taiwan. Its history and expertise at producing some of the most revered oolong teas, growing on some of the world’s highest tea mountains is a perfect combination for tea lovers. This is because tea plants thrive in the cool and misty atmospheres of higher elevation. In fact, we source two high mountain oolong teas from two of the most well-known mountain ranges on the island, Ali Shan and Li Shan

Ali Shan vs. Li Shan. Get to Know Them

They are both examples of gao shan (high mountain) teas, which is the local classification for teas  grown around or over 1,500m altitude. But don’t be confused by the names; Ali Shan (Ancestor Mountain – ‘shan’ meaning literally mountain) is a range of mountains towards the central/south east of the island. While Li Shan (Pear Mountain) is a higher elevation range further to the north. Both are green-ish, balled oolongs - although grown in different places and and from different cultivars, or types of the tea bush; they make a great comparison to help understand how even changes in the terroir can affect the flavour. 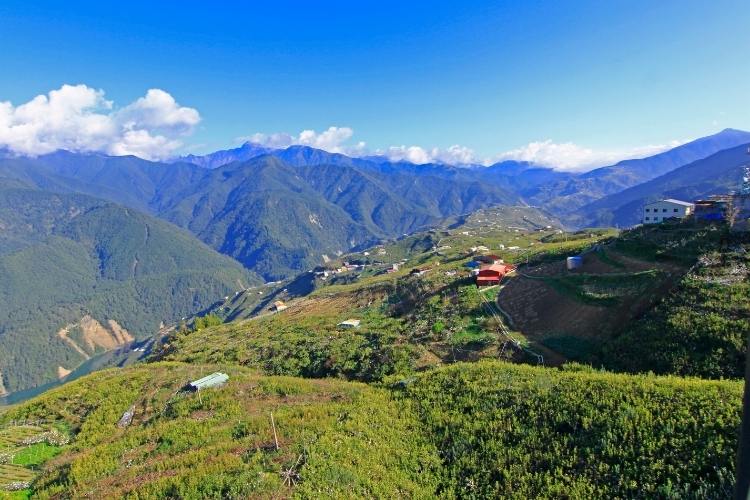 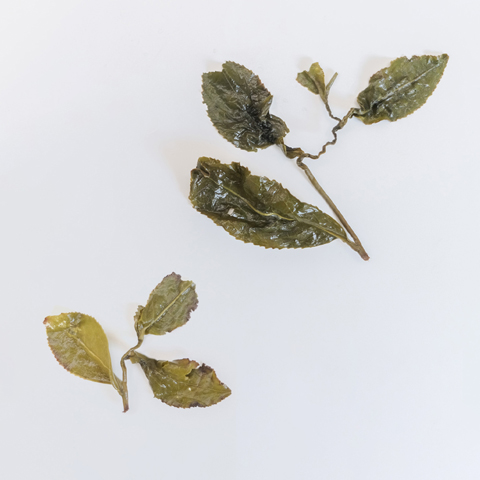 Both Ali Shan (left) and Li Shan (right) are ball-rolled, a step in the processing where the large leaves are compressed and unfurl once infused. 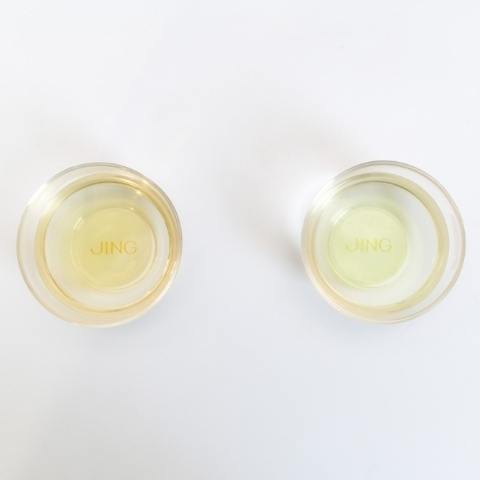 We'd recommend Ali Shan (left) if you're new to oolongs and Li Shan (right) if you want something fruiter, richer and more indulgent.

From the pictures of the dry and wet leaf you might be able to tell that it’s not just the names that are similar, but also the appearance. Both of these oolongs are ball-rolled, a step in the processing where the large leaves used to make the teas are compressed and unfurl once infused. They’re also both lightly oxidised, around 20%, meaning they retain some naturally greenish hues and a more developed flavour.

One difference you might not be able to detect is that the Ali Shan, produced by our longstanding collaborators the Chen family, was crafted using the ‘Jin Xuan’ (Golden Lily) cultivar, prized for its naturally milky flavour. While the Li Shan, produced by Mr Yang uses the ‘Qing Xin’ (Green Heart) cultivar, also widely grown in Taiwan and known for its deep aroma.

But how do they taste? I’ve infused both teas using our glass tea-iere with 4g of leaf to 250ml of water. For both teas, I used the recommended 100˚C (boiling water) to help the leaves unfurl and extract maximum body and flavour. Both teas were infused for 3 minutes. To highlight and compare the best of both, I’ve gone through the results in 5 easy categories:

Aroma – Fragrance is a key factor in Taiwanese oolongs and something that producers work very hard to ensure during the tea picking and processing, using intuition and masterful technique. The Ali Shan has a distinctly milky and biscuity aroma, with some hints of lime citrus and fresh green veggies. So, a good balance of sweetness against a slightly vegetal character. The Li Shan is not too dissimilar, but the fruitiness is much more pronounced, with more of a light and sweetly spiced tropical twist – think baked pineapple, apricot cream and cinnamon.

Taste –  Ali Shan carries through with the prominent milkiness thanks to the ‘Jin Xuan’ cultivar, as well as plenty of floral sweetness and a pleasant citrusy tang. The Li Shan infusion is very creamy, which balances the prominent notes of tropical fruits, especially the zingy pineapple flavour. There’s some thicker grassiness too, making this overall a bit deeper and more engaging than the comparatively delicate flavour of Ali Shan.

Texture – I found the Li Shan to be noticeably thicker in texture, with that creamy flavour adding to the mouth feel of this tea. The Ali Shan infusion was still delicious and rich but it didn’t have the same overall thickness of body as the Li Shan.

Finish – The taste of these teas lasted well into the finish, the Ali Shan being slightly less intense than the Li Shan, but both infusions coated the mouth in a characterful, fruity sweetness.

Feeling – The Ali Shan infusion left me with a refreshing sensation, with its floral and citrus flavours being uplifting and bright. While the Li Shan seemed to be richer and more indulgent, the notes of cream and tropical fruit making it a really engaging experience.

Hopefully this quick taste comparison will give you an idea of what to expect from both teas. But if you’re still unsure which one is for you then I would say try Ali Shan if you’re new to oolongs and want to get a good taste of what high mountain teas from Taiwan can offer. If you want a more indulgent experience then go for Li Shan for an even fruitier and richer infusion.

You can dive further into the world of Taiwanese oolongs by checking out more features on our Journal. Here you can meet the producers behind our teas and discover even more about their origin and flavour. 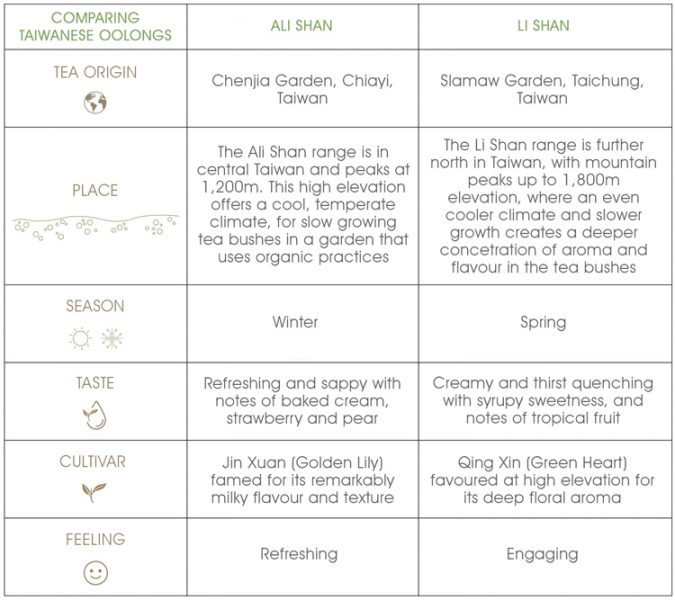