Black tea and green tea are the two most well-known tea types. In fact, you’ve probably tried them before. But do you know what makes them look and taste so different? Read on to find out. 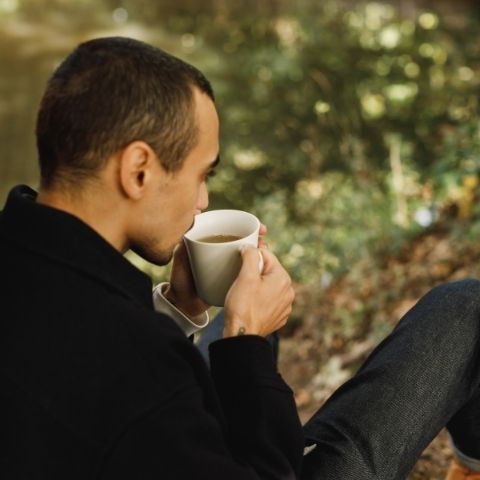 Rich and robust black teas might be the UKs favourite, but the popularity of green tea is certainly on the rise. 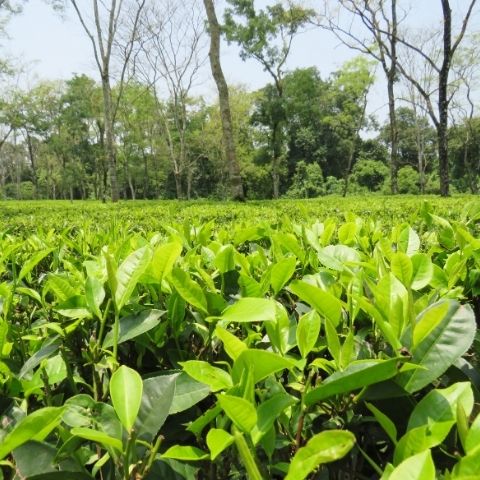 Black tea vs. green tea, which one is better? Do we even have to pick one? Black tea makes up most of the daily cups we drink here in the UK – everything you normally find in a rich and robust breakfast brew is black tea, so it’s pretty popular. But we’ve also seen a big boom for green teas too, as more people begin discovering the other tea types in search of new and exciting flavours from their tea. What’s cool about green tea and black tea is that they sit at opposite ends of the tea spectrum and offer a great way to begin understanding what makes tea taste the way it does. Hopefully opening the door to even more flavour potential.

The six different types of tea , including green tea and black tea, all come from the same plant. That plant is called Camellia sinensis, but we know it as the humble tea plant. Black and green teas are also the most popular tea types and so are produced in many places around the world. However, they both originated in China – green tea first a few thousand years ago, while the methods for making black tea were only discovered in the 1600s. Over the years tea cultivation has spread to different origins and now we find that certain tea producers or specific gardens specialize in producing mostly green teas, like organic Jade Sword green tea from Baotian Garden in Hunan, China. While others produce mostly black teas like our Assam Gold, from Assam in India. The reason we see this variety in black and green tea production depends on many factors, such as:

• Having the right kind of weather – seasonality is important for tea gardens, so tea farmers will know how the weather behaves in their areas. This means that over centuries, tea types have evolved and adapted to certain conditions. For example, the hot summers of Assam help to enrich the tea plants with a particular malty and robust flavour that’s perfect for making black teas.
• Having the right tea plants – different cultivars of the tea bush have been bred to generate certain flavours when processed as a particular tea type. For example Long Jing #43, which is almost exclusively used to make Dragon Well green tea because it produces lots of small, sweet buds and leaves during the early spring season, and is also known for its floral aroma and stronger flavour.
• Simply having the right tools to make a certain types of tea – the two tea types utilize different methods of craftsmanship and may require certain tools or expertise to make them well. Some methods are closely guarded secrets that remain known only within the generations of families or small communities. 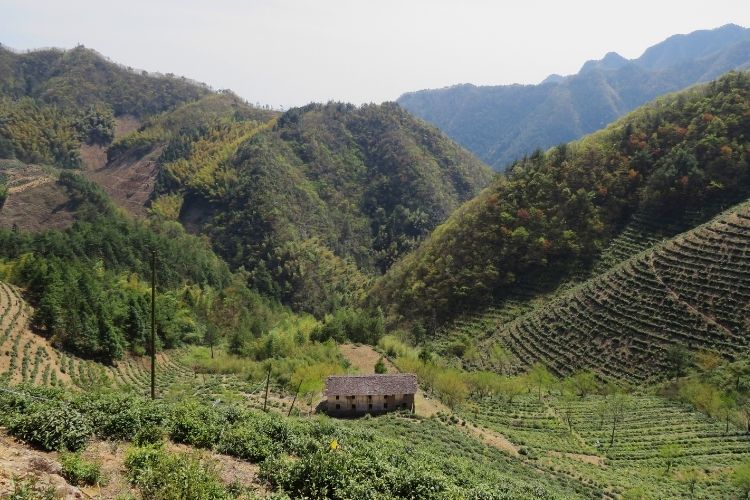 Plainly, green tea is completely unoxidized (0%), while black tea is fully oxidized (100%). Although these teas both begin the same way as a fresh tea leaf, once picked they go through completely different processes to create a green or black tea. Though the processes for crafting each tea type are unique and highly complex, there is one clear distinction between the two and that is oxidation. So, the names of the tea types, ‘green tea’ and ‘black tea’, are helpful as they not only refer to the process behind the making of each tea, but also to the oxidation level.

As you can probably tell then, the resulting teas sit at opposite end on the spectrum of tea types. Not only does this effect the look of the teas – green tea being, well…green and black tea being a much darker brown – but the oxidation level also has a huge impact on the taste of the tea. The principle here is best explained using the simple example of a green apple. If you bite into a fresh, green apple it’s sweet, refreshing and crisp like a green tea. However, if you were to bite into the apple and let it sit on your kitchen counter it would go brown. This is oxidation! As the flesh of the apple reacts with the oxygen in the air it becomes darker, the aroma gets stronger, the texture becomes smoother and importantly the taste gets richer – just like a black tea. 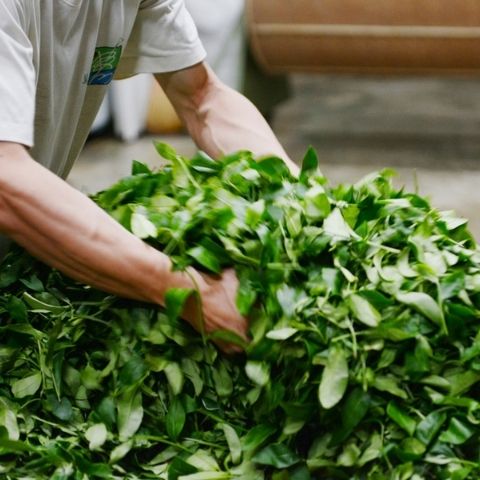 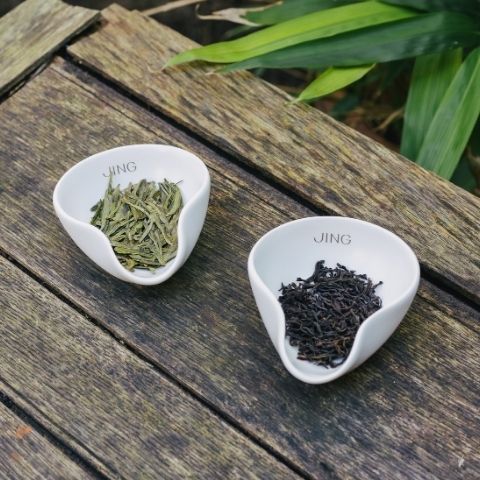 A few years ago, we commissioned antioxidant and caffeine tests by a laboratory on a range of our teas to find out conclusively whether the commonly-held beliefs on the caffeine levels contained in tea are accurate. The results of the tests were very illuminating and have led us to reassess our approach to labelling caffeine levels on our teas. What the tests show is that it is difficult to make generalisations about the caffeine levels found in the different categories of tea, which are commonly made by tea companies. In fact there was a generally similar level of caffeine throughout the tea types, ranging between 23mg to 46mg per 100ml of tea, which is roughly under half the amount you would find in a same sized cup of coffee. However, there is one exception when it comes to green tea and that is matcha, a powdered green tea from Japan. The reason matcha contains more caffeine is because you ingest the whole leaf in powdered form, rather than just extracting its flavour for a normal tea infusion. This means you get the full caffeine content from the tea leaves which is similar to a shot of espresso coffee.

Perhaps the most well-known example of Chinese green tea is Dragon Well from Hangzhou in Zhejiang province. It has a light vegetable sweetness, like fresh sugar snap peas and green beans, with grassy notes that are almost floral. As it’s fried in a wok there’s also a hint of chestnut warmth. Japanese green teas on the other hand are much deeper and richer. As they’re steamed, they tend to have a noticeable change in texture, being rounder and almost buttery. There are green vegetable notes, but more like steamed spinach or even complex dried nori. This richness is often characterized as umami, a ‘deliciousness’ or savoury taste you’ll find in Japanese teas like Sencha and Gyokuro. 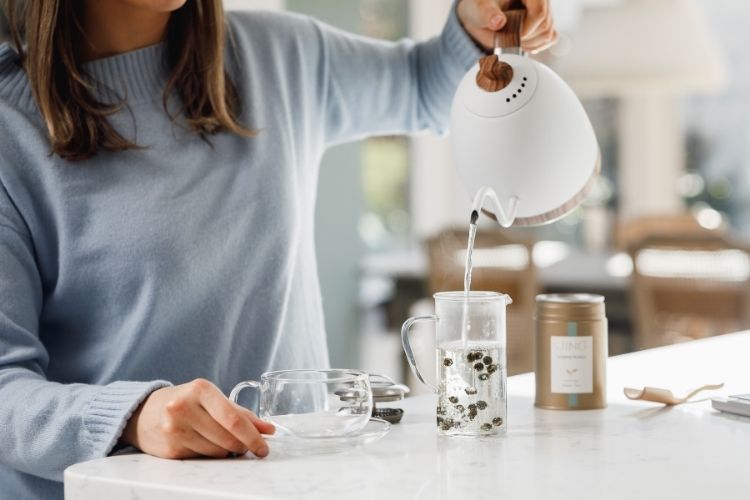 As they sit at different ends of the tea spectrum, green tea and black have contrasting flavours.

Black teas tend to have a similar quality of being richer and obviously darker than green teas, but when it comes to their precise flavour I also like to think of them in two groups – malty or fruity. Malty teas are usually found in India where the teas grown at low elevation in places like Assam are subject to bright sunlight and produce black tea that is known for its malty, rich and honeyed taste – the kind of breakfast tea you would have with milk. Though you can find malty teas in China too, like Yunnan Gold or the classic Keemun Mao Feng, they’re typically much lighter in taste than what you find in India. Chinese black tea can also lean much more towards a fruity character, especially those grown at high elevations well over 1000m. Here, the tea bushes retain much of their natural qualities, shrouded in a protective layer of mist. A black tea like Red Dragon is a great example as its unique fruity flavours of sweet red berry, ginger and chocolate partially come from its specific tea cultivar.

The smooth, umami taste of Japanese Sencha green tea is a result of the leaves being steamed, which fixes their verdant green colour. 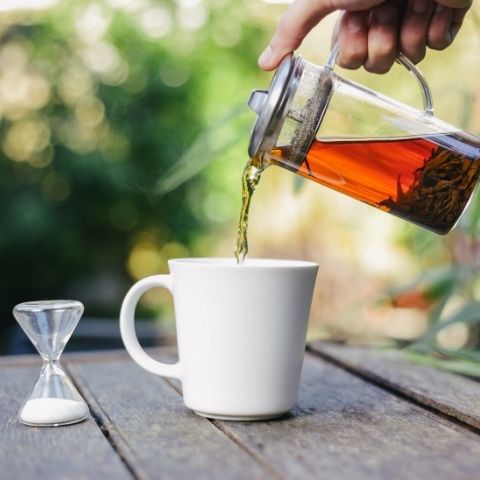 Red Dragon is a great example of how fruity, flavourful and complex black teas can be.

How Are They Made?

Here’s a rough guide of how green tea and black tea are created:

For green tea the leaves are picked and withered, then soon after they’re heated up, essentially cooked or ‘fired’ which keeps them green. In China this process is literally known as ‘kill-green’, as the heat kills the natural enzymes in the tea leaves that would otherwise react with oxygen and turn them dark. For Chinese green teas, they usually fry the leaves, while in Japan they use very hot steam and then roll the moisture out of the leaves. After this heating, the tea is fully dried with a light heat and then ready to drink.

Black teas start the same way. The tea is picked from the bushes and withered, but instead of being heated up, the leaves are rolled. This can be done by hand for small batches of tea but is often done using a rolling machine. This machine macerates the leaves, exposing the enzymes in the flesh of the leaf to air. After the rolling, the leaves are left to oxidise and turn dark, then they are dried and finished.

Though this is a rough outline, it’s always important to remember that many of the precise elements involved in producing single garden tea are led by intuition and knowledge of experienced tea producers.

Enjoying these teas can be simple with just a few tips to make sure you get the most from your infusions. 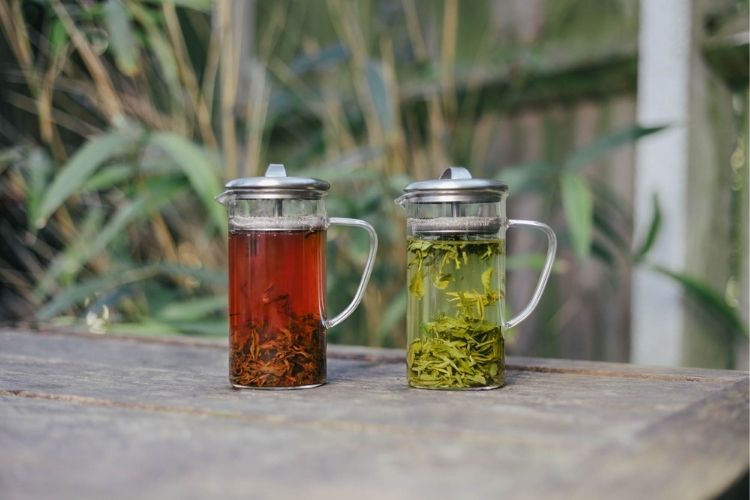 Enjoying loose leaf green and black teas can be really simple with a few key tips like choosing the right water temperature.

For green teas, our rule of thumb is to use cooler water. For Chinese green teas this means 80˚C and for Japanese green teas more like 60-70˚C. At this temperature, you’ll extract more of the sweetness and refreshment from your green tea. To get the right temperature you can simply add a splash of cold water to your teapot (add roughly a 1/5 for 80˚C and more if you want cooler water) before topping up with boiling water. If the water is too hot, you risk over-extracting the heavier notes of the tea, which will result in more tannins, bitterness and a slightly rough feeling in your mouth. You can always check out our full guide to making green tea for even more brewing secrets.

For black teas it’s much simpler. You can use boiling water as you want to extract plenty of rich flavours. Though, we do suggest that if you’re used to drinking black tea from tea bags, you should give loose leaf a try. Freeing your leaves from the constrains of a bag means they have extra space to unfurl and infuse in the water. The more the leaves interact with the water, the more they’ll release their distinctive flavours, and so very often freeing your leaves means a better tasting cup of tea. If you want to know more about elevating your black tea drinking, than follow our guide to the ultimate breakfast tea.