This Easter we’re diving into the world of bean to bar chocolate, with the help of London based LAND chocolate, to give you some tips on how to pair chocolate with tea – for a deliciously indulgent, taste experience. We met up with Phil at his small factory in Bethnal Green to walk through the wonders of chocolate making, literally from bean to bar. 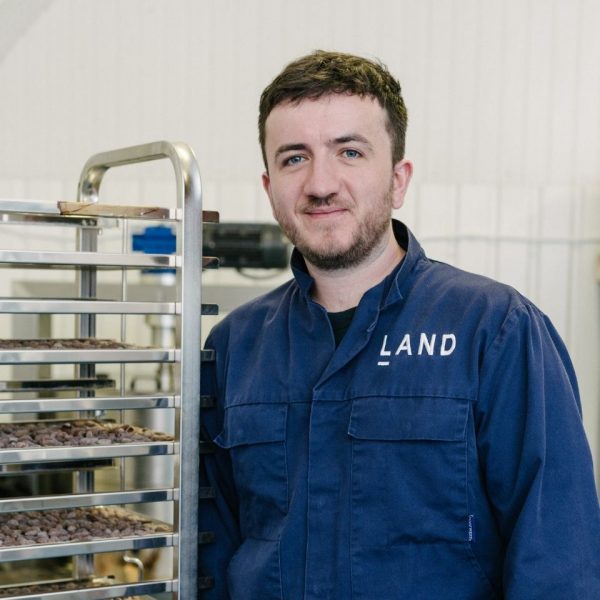 Where all Chocolate begins – the cacao beans

“The whole chocolate thing was never in the plan.”

After an eye-opening experience working on a cocoa farm in Guatemala in 2012, Phil Landers returned to London, dropped his career at the BBC and took the leap into chocolate. His new found passion for cocoa led him to esteemed chocolatier Paul A. Young, where he began creating wild, adventurous and beautiful chocolates and desserts. But Phil’s ambition was a much more hands on approach to the actual craft of chocolate. To be not just a chocolatier who makes nice things ‘with chocolate’, but to make the chocolate itself. He got this chance in 2015, working with Mast Bros. the renowned American chocolate makers. Before stepping out on his own in 2016 to establish LAND in a small workshop in London – one of a handful of independent bean to bar producers in the UK.

“Origin is where the story always begins for any chocolate bar. The work done by the farmers is intensive and vital.”

The first thing Phil explained to us was where chocolate begins its journey. Chocolate is derived from the nibs of fruit seeds of the cacao tree. A tree that thrives in tropical environments around the world from Mexico to the Philippines. In the summer and autumn, depending on where you are, the trees produce a colourful fruit pod. These fruit pods, when cracked open reveal rows of around 50 white cacao beans (the fruit seeds). The beans are hand-harvested and then carefully fermented in wooden crates from 5 to 7 days. This turns them from white to a dark purpley-brown. After this they’re dried, bagged up and shipped directly to London, where Phil processes them into LAND chocolate bars.

Phil receives fresh beans from farms all around the world. When we met he was working with a batch from Nicaragua that would become his 73% Nicoliso bar. He starts by hand-sorting every bean to get rid of any broken or bad beans. An important step to achieve uniformity throughout the process. He then roasts the sorted beans on trays in kilogram batches. This short roasting can be profiled to intensify the depth and flavour from the nibs – this what Phil is really after, the small cacao nibs inside each bean. After roasting, these nibs are extracted from the beans by passing them through a crushing and winnowing machine, which separates the nibs from the bean husk. 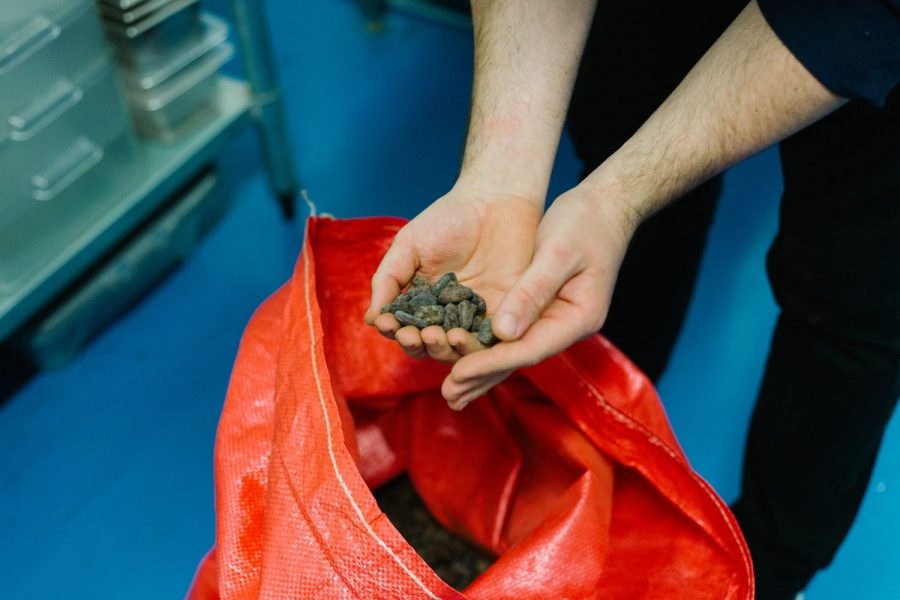 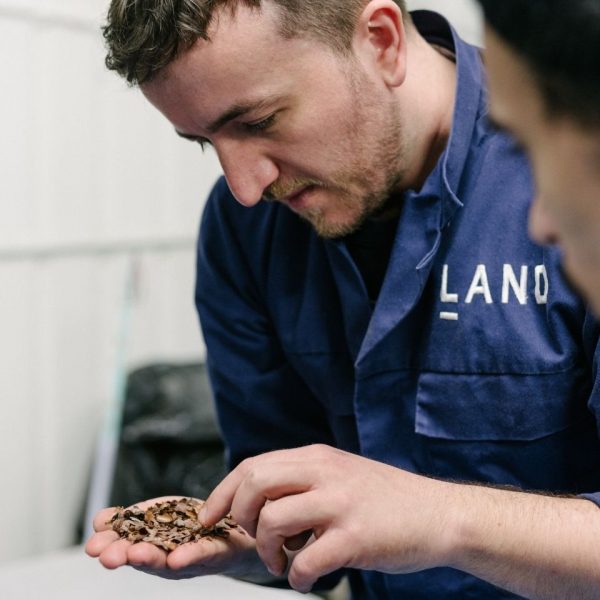 After cracking and winnowing, the roasted husks are seperated from the nibs 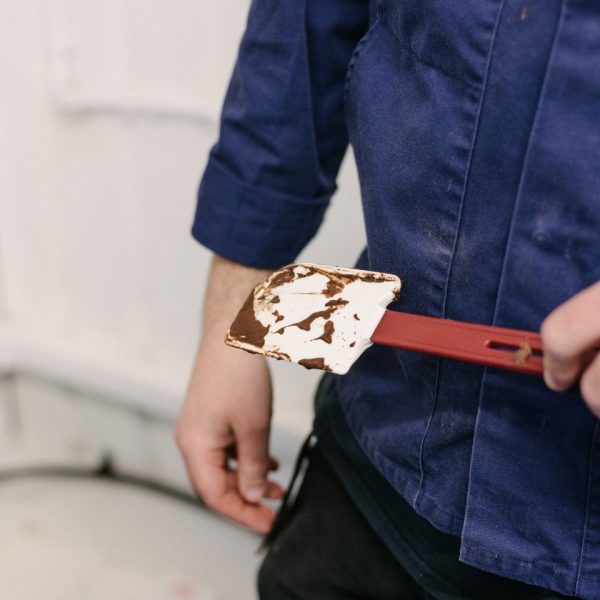 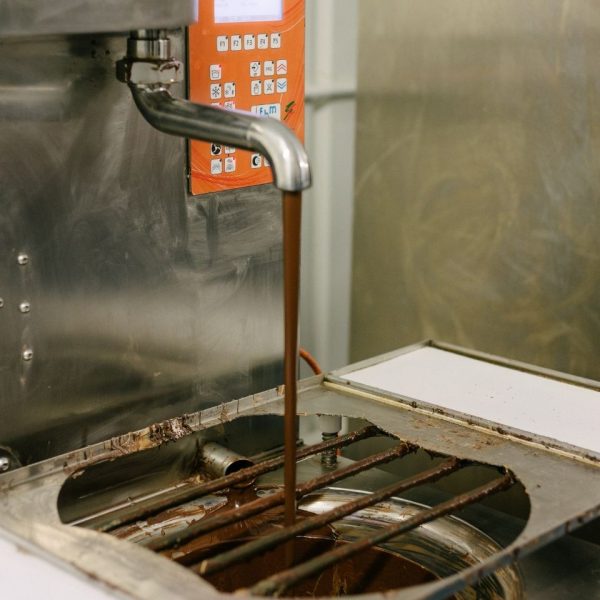 This tempering machine produces a river of cooled chocolate

“At origin, flavour potential is developed through genetics and terroir, followed by fermentation and drying the beans. It’s then handed over to me to unlock that natural potential formed in the cacao.”

Next comes the slow process of conching and grinding. The nibs are ground until smooth for up to 2 or 4 days depending on the machines used. This is also where Phil can begin to shape the taste of his bars. Adding the organic cane sugar and natural cacao butter (a bi-product of grinding the beans) to help smooth out the texture and accentuate the natural flavours of citrus and grapefruit from the Nicaraguan nibs. It’s often only these three ingredients that make it into a pure LAND chocolate bar.

After the long grinding phase the liquid chocolate can be cooled, stored and aged to develop even more flavour. But to make the finished bar the chocolate has to finally be tempered. A method of heating and cooling the liquid chocolate to create a shiny finish and the perfect ‘snap’. Then they’re poured into the LAND molds, left to set and ready for tasting.

“The mass market chocolate industry was built on pretty terrible ethics. It’s created a consumer who see’s chocolate as a cheap food commodity. The consequence is farmers being taken advantage of and that’s not sustainable.”

Normally at Easter, we’re used to supermarket chocolate eggs or tins of flavoured chocolates. The commodification of chocolate has meant less traceability, less money going to farmers whose livelihoods are at risk and ultimately, lower quality chocolate. But there is another way. Seeing the labour intensive process that goes into crafting a single bar of LAND chocolate is eye-opening. The care and consideration at every step during the intensive process is what makes bean to bar chocolate so much better. 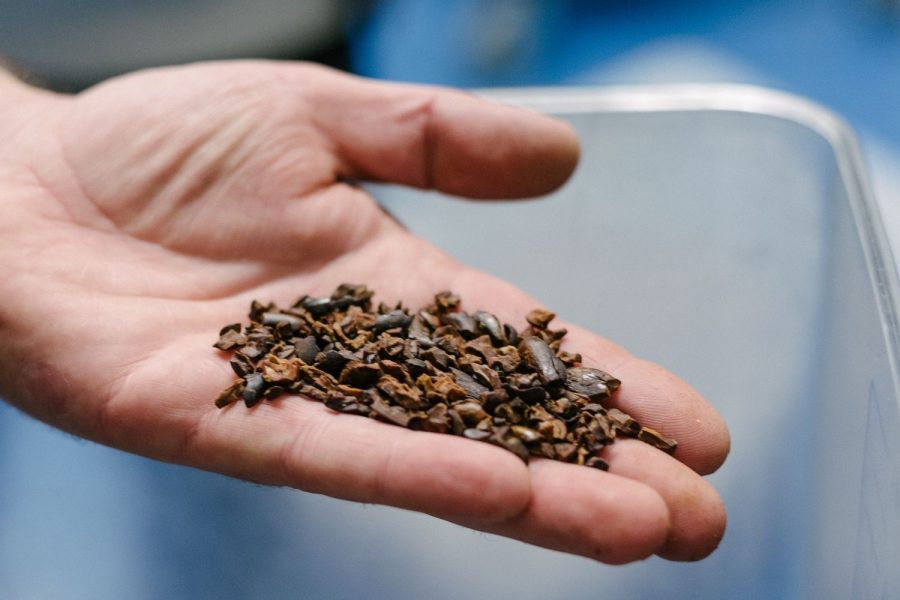 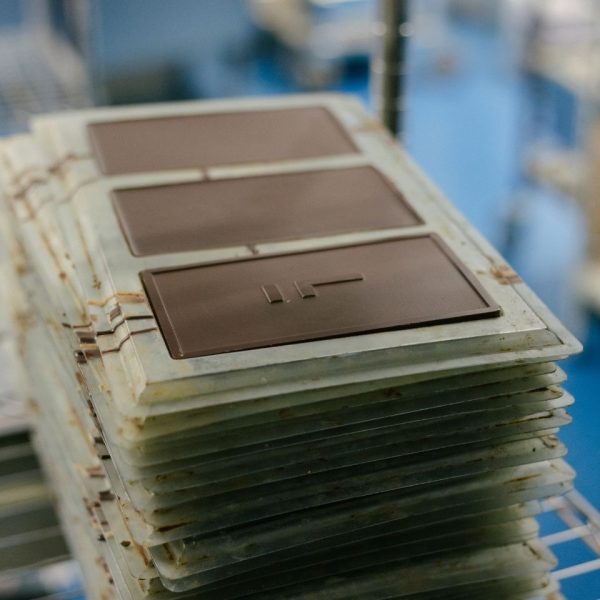 Each bar is individually moulded with Phil's seal of approval 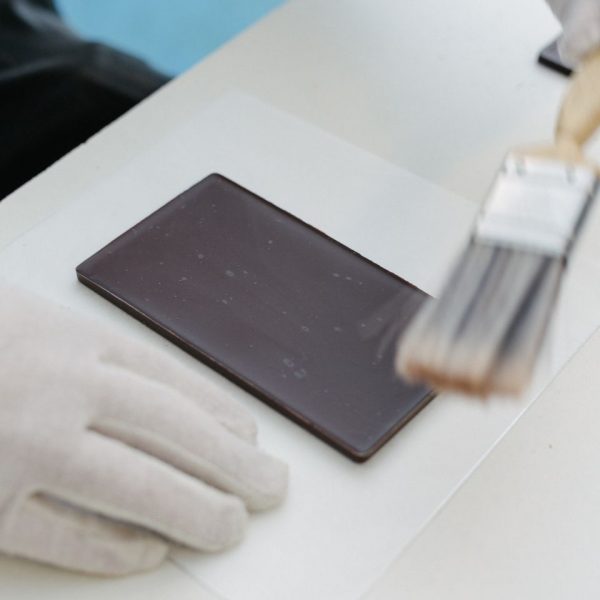 So much care and effort goes into creating each bar

“Don’t fall for the trap of stickers and labels. It’s annoying and takes a bit of extra work but we have to start looking beyond packaging. Research the brands you buy from, you’ll soon learn what they stand for and if they follow through with what they claim on the packaging.”

Just like with tea, there are key markers for a quality product and it’s often in the detail. Understanding the ingredients used and where they come from can really help identify what you’re buying. So look for the origin of the cacao beans used, this isn’t something you’ll find on commodity chocolate bars. Also avoid those with a long list of ingredients. These will be added to create a uniform, characterless taste. Like Phil says, its often about discovering the people and places behind the product that can help you to understand and enjoy it even more. 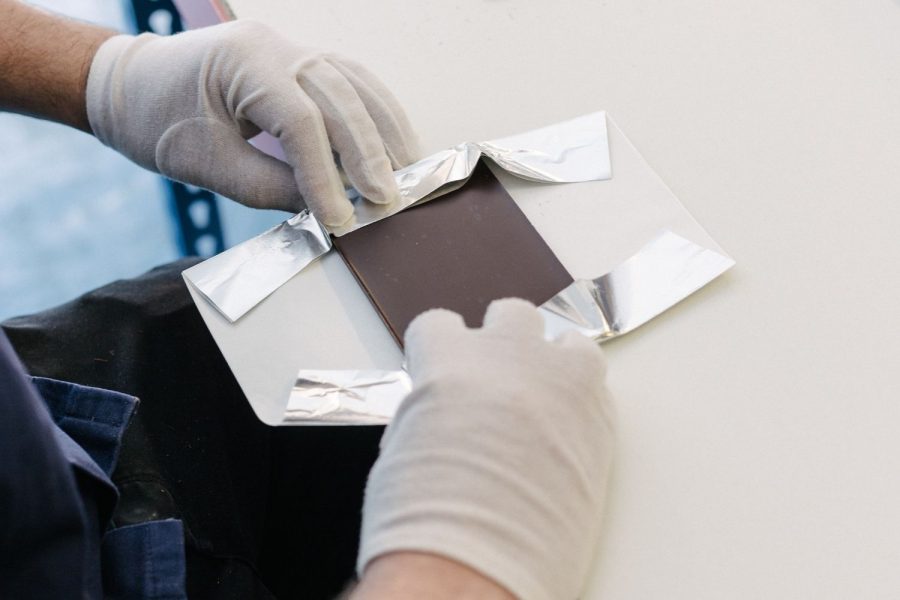 The final step is to wrap each Chocolate bar by hand

“We instinctively reach out for chocolate and tea for the same reasons, normally when we need comforting, tea and chocolate play that role very well.”

Want to know how to pair tea and chocolate? Discover the best way to taste single garden tea and bean to bar chocolate this Easter.