Hailing from the same place, but made in different seasons, we put these two highly aromatic mountain teas head to head. Find out why you’ll always get warmth and refreshment from these teas and work out which one you’ll prefer. 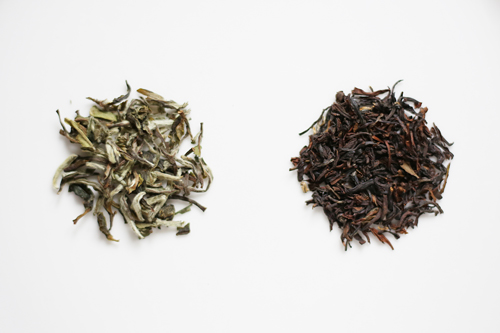 What are the flavours of Darjeeling?

Darjeeling is a well-known tea region in West Bengal, India. Around 2000m up in the Himalayas, the mountainous area has a cool climate where luscious, leafy green slopes filled with bamboo plants, pine forests, rhododendron and orange orchards thrive alongside the rolling hills of neat rows of tea bushes. Holiday makers travel from all over India (and further afield) to get a taste of this historic hill station. High on most agendas is trying the plates of steaming ‘momos’ – the local delicacy of carefully folded dumplings typically filled with pork, onions, coriander and a healthy dose of warming ginger. Trays of momos share table space with hot soups and steaming baskets of sticky rice. This hot and heavy mountain food is usually walked off on hikes through tea fields or up Tiger Hill, where early risers hope to catch a glimpse of the sun coming up above Mount Everest and Kanchenjunga – when the mountain mist allows it. All of these days are broken up with a daily afternoon’s refreshment – dainty china cups of light, floral, fruity and hay-honeyed Darjeeling tea.

The garden owners in Darjeeling have been producing their distinctive styles of tea using generations of understanding and knowhow about how their selection of specific cultivars of the Camellia sinensis tea bush work alongside the high mountain mists, temperate climate and soil to give the tea its unique taste. It’s the only tea region in India to have a protected geographical indication – a status that was fought for by the local tea board when faced with decreasing prices, driven down by an increase in demand for cheaper, indistinct black tea for blended dusty teabags. Darjeeling knew they had something special to protect, as the taste of Darjeeling cannot be replicated anywhere else in the world. The determination to get this status is not surprising, considering more than 50% of the population rely on tea for their livelihood. The unique character of Darjeeling is not only treasured and prized by the locals, but it’s recognised by tea lovers all of the world, so much so that the annual arrival of new batches usually causes a bit of a frenzy – everyone vying for the first taste of the new season. 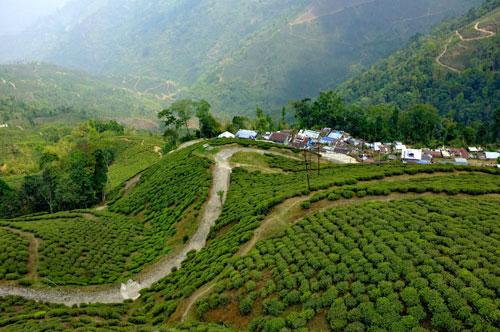 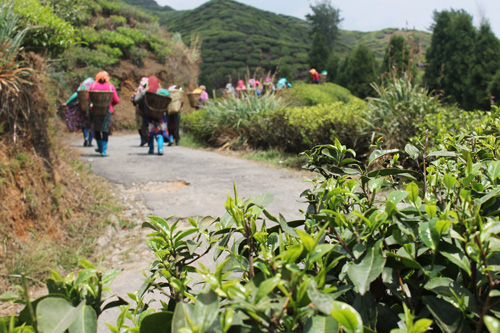 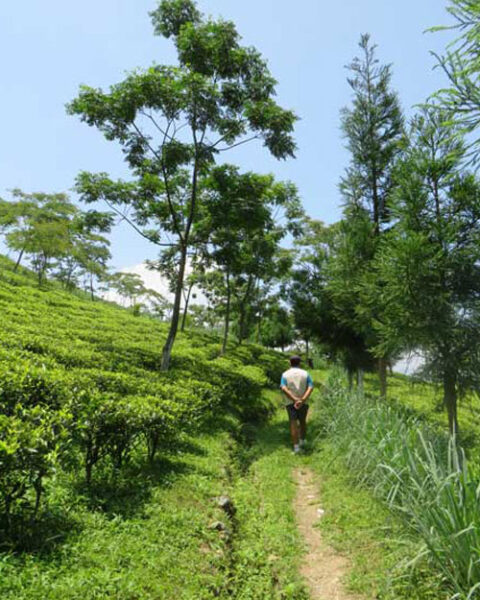 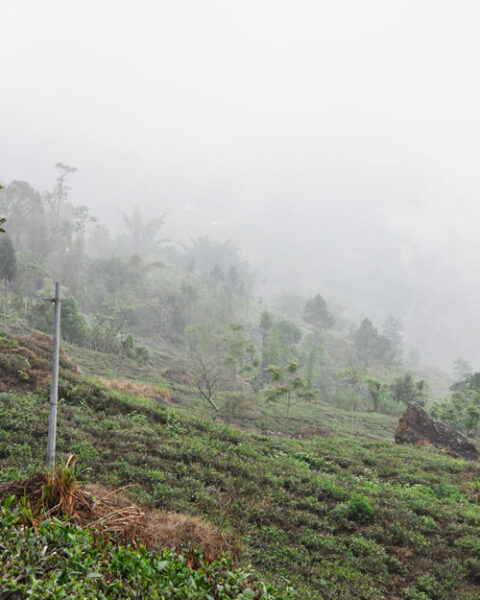 Cool mist sweeps over the high mountains of Darjeeling

It’s not been an easy few years to be a tea farmer in Darjeeling. Political strikes, the recent lockdown and increases in severe weather events have brought tea production at crucial times to a standstill. This year, the lockdown in Darjeeling happened right in the middle of the first flush season, which meant only a tiny amount was produced before the fields were abandoned. We wrote about what happened here and how we stayed closed to the gardens and managed to get a very early tea. These challenges all contribute to ongoing changes in the region – manifesting in many ways, from increases in people moving to towns to join the tourist industry, or to farmers cultivating new styles of Camellia sinensis – coaxing out new, different flavours that show their place to new generations of tea lovers. What is not changing though is the commitment to the quality of to the two prized flushes or pickings every year. Locals are rightly very proud and determined to retain their region nickname “the Champagne of teas”.

The Differences between Darjeeling First and Second Flush

The two distinct flushes, known as first and second flush indicate the two major picking seasons. The 1st flush happens in March during the first days of spring, and the 2nd flush starts in the early days of summer in May/June. The two flushes have slightly different processing methods – the cool spring days mean that the bushes are covered in slow growing buds and leaves and after rolling, the leaves and buds don’t oxidise very quickly. Oxidation is the process which concentrates the flavours and changes the leaves from green and fresh to dark, rich and ripe. Darjeeling tea farmers use this cooler climate to their advantage and have developed a process that means that although the leaves are rolled and left to oxidise, they retain much of their green colour even after their oxidation. The result is a light tea, highly aromatic and highly floral – a character that represents the crisp and refreshing quality of spring in Darjeeling. This first flush style is unique to the region and only made in a small quantity – the picking season no longer than four weeks.

The second flush represents a more classic style of black tea. The weather in early summer is much warmer and so the leaves grow faster. Pickers focus on whole leaves and not the buds and after rolling, the leaves are left to fully oxidise and concentrate their green flavours into rich black tea. The cultivars used in Darjeeling combined with the place deliver a very refreshing, complex fragrance that can only be Darjeeling – full bodied and warming, with grape, hops and citrus flavours in the best cups.

Here, I’m comparing the first flush from 2020, picked in early March in the organic Badamtam Garden. Mr Sen and his team have used the “AV2 clonal” variety of tea bush, which has plenty of large silvery buds and tender green, young leaves, leaving a light and fresh taste. Dive into this tea in more detail here.

The second flush is a summer 2019 picking. It’s fully oxidised and designed to be a rich and robust black tea. Tom, our Head of Tea, created this batch by selecting batches from a few of Darjeeling’s best gardens, balancing high aromatics with smooth, rounded body.

I’ve infused both teas using our glass tea-iere with 4g of leaf to 250ml of water. For the first flush I used the recommended 80˚C as the slightly cooler water preserves the sweetness of tea. For the second flush I’ve used 100˚C to bring out the full body in which to carry the richer flavours. Both teas were infused for 3 minutes, so to highlight and compare the best of both we’ll go through the results in 5 easy categories: 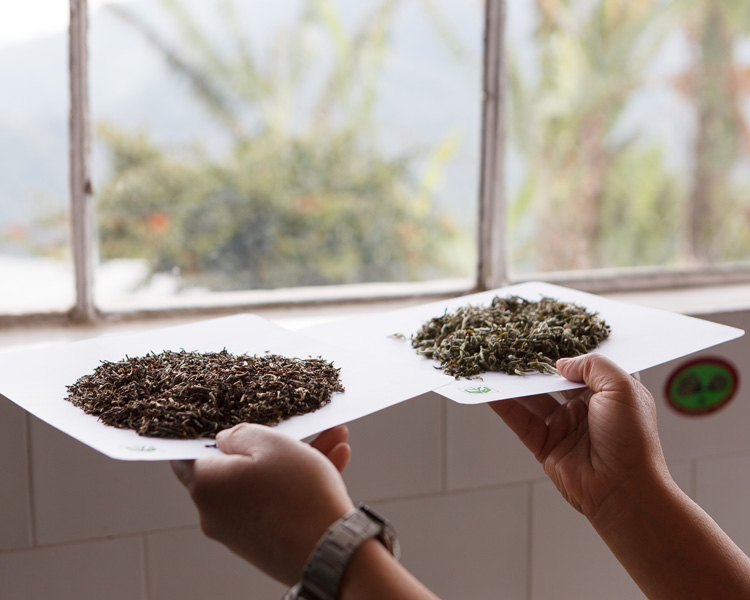 Comparing the first and second flush leaves at origin 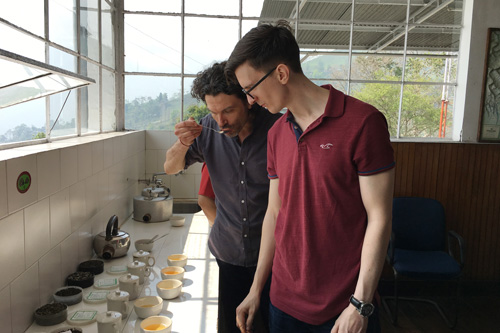 Aroma – The fragrance from both infusions is complex but typical of Darjeeling; clear, bright, slightly floral with hints of citrus. The first flush seems more obviously fruity with a prominent, meadowy warmth. The second flush has more depth with aromas of hops and hay that make the lemon-citrus high note really pop, as well as some hints of wildflowers.

Taste – Darjeeling First Flush is lighter; as expected the partial oxidation makes it characteristically more like an oolong tea or even a Chinese style white tea as opposed to a black tea. The infusion is bright and fruity, I’m thinking juicy peaches and fresh grapes that are crisp and quenching, with a slightly honeyed character too. The Second Flush is very different, as the colour indicates it’s more of a typical black tea – although still much lighter than a breakfast style tea from Assam. Darjeeling Second Flush is very balanced with a fruity finish and plenty of depth. There is still grape sweetness like in the first flush, but it’s alongside toasted hay and hops flavours. It’s much more warming, but has some florality too, although wildflowers are much more subtle than in the first flush.

Texture – Both infusions are super smooth and thick. They lend themselves perfectly to afternoon drinking – easy to sip on and really satisfying.

Finish – The finish on these teas has a crispness and light astringency that is distinct to Darjeeling teas. This astringency is more apparent in the first flush, where it enhances the light and refreshing quality and balances with the sweetness to give a quenching sensation. It’s more mellow in the second flush but is noticeable and adds to the satisfaction and refreshment of its fruit character without being drying.

Feeling – Drinking these teas side by side I’m given the perfect example of why terroir or ‘taste of a place’ is so important for tea lovers. Both infusions really reflect the bright and fresh quality of the high mountains that produced them and flowers, fruit, toast and honey are all celebrated flavours. I’m refreshed and cooled by the first flush; more warmed but still refreshed by the second flush – an exact replication of the two seasons in Darjeeling – the cool spring and warm summer, both happening in the refreshing mountain scenery. 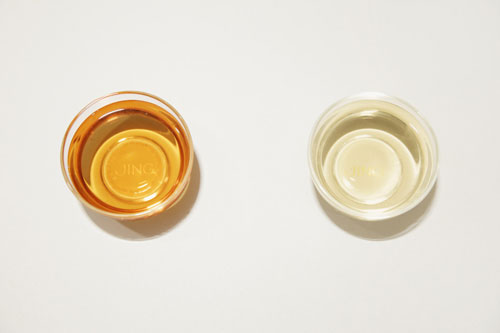 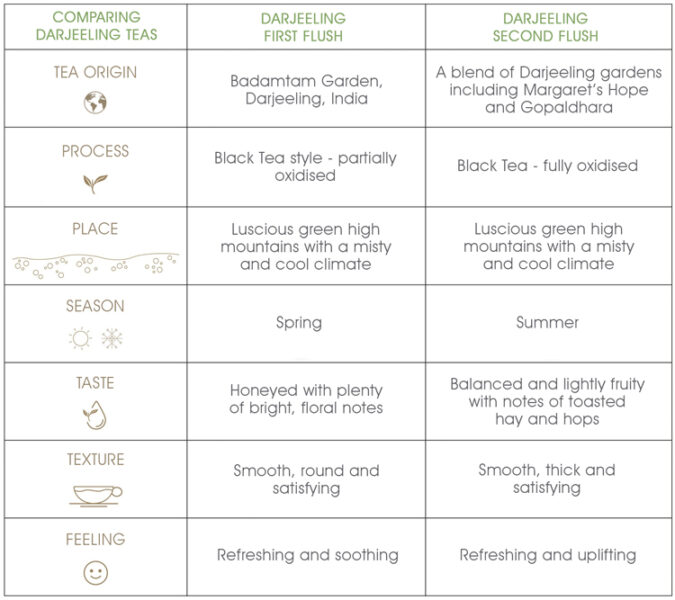 Discover All Tea With Food