The Japanese name Genmaicha translates as “brown rice and tea”, and this tea really is as simple as that – it’s green tea blended with toasted rice kernels. With its roots in the Japanese folk custom of roasting leftover rice cake and adding it to tea in winter, and with nicknames like “popcorn tea”, it’s a tea often overlooked as a novelty. However, high quality ingredients can transform Genmaicha into a green tea that is both refreshing and warming. With fresh, spring green flavours mixed with deep, roasted autumn flavours, it tastes both sweet and savoury. It’s an easy going tea that can be enjoyed at any time of day and in any season. 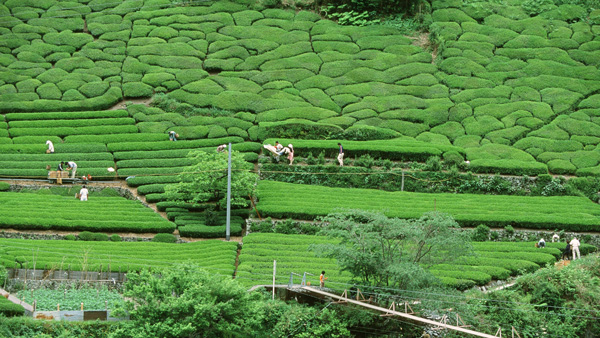 A busy time in the tea fields of Shizuoka, with plenty of delicious tea being picked

Genmaicha green tea comes from gardens in the coastal region of Shizuoka in the shadow of Mt Fuji and it relies on a tea refiner, Mr Wada, to oversee its final stages of production. Read on to find out why tea refiners only exist in Japan and why we selected a rice called 'Mochi Gome' to go with Wada’s spring green bancha tea. 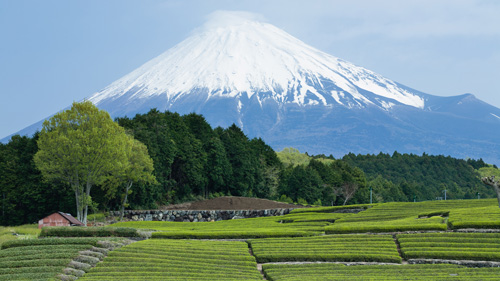 The tea gardens of Shizuoka in the shadow of the great Mt Fuji.

Style: A blend of steamed bancha green tea with toasted and popped rice

Terroir: Grown by the banks of the Abe river in Japan, the terroir is rich and fertile with a seasonally temperate climate.

What kind of tea does Shizuoka produce?

Rising from the Akaishi mountains, the Abe River flows down through the heart of Shizuoka, stretching to the Pacific Ocean and providing a large fresh water source for the entire prefecture. Abe River feeds the rolling hills that elevate from its banks, making them a great spot for tea gardens to thrive. This area is known for producing green tea in the traditional Japanese style, which means that after picking, the greenness of the leaves is locked in through steaming (this is different to the Chinese style where the leaves are fixed by either baking or frying). The steaming works to bring out the deep umami character of the Yabukita cultivar. This cultivar is prized in Shizuoka for being first cultivated in the region and now makes up 90% of the tea bushes grown here. The cultivar delivers a resistance to the frosty winter weather during the dormant months and a high yield in the spring, and perhaps most importantly, it works with the Shizuoka soils, climate and ways of tea making to create plenty of umami character.

Although a relatively low elevation for tea, the temperate climate and cooling, costal breeze provide a great environment for the tea plants, with production happening through spring and summer. As with most high quality tea growing regions, the spring picking is the most prized. The youngest leaves have the freshness of the season and the cooler spring days so that they grow slower than in summer and have longer to develop their umami character and refinement.

How did we source this batch of Genmaicha and who made it?

This batch of Genmaicha was produced by tea master Hiromi Wada in late spring 2019. Wada’s role is known as the Tea Refiner in Japan. It is a position unique to the Japanese tea industry – needed because of the styles of tea that are produced and because of the mechanisation and automation of the industry. Mechanisation began during the Meiji era (in the late 19th Century) which saw much of the country industrialise. Machines for picking, rolling, shaping, grading and sorting were all introduced and since then have themselves been refined so that experienced tea producers and refiners, such as Mr Wada can work with them to produce incredibly consistent and high quality tea. At the refinery, Mr Wada processes what is called ‘aracha’, meaning crude or unrefined tea which is partially processed; having been steamed and semi-dried at the tea garden. The aracha will still contain lots of larger leaves, stems and broken pieces, so the refiner will control the process of sifting and sorting it into various grades, before a final heat drying stage creates the finished tea ready for blending. Our relationship with Mr Wada means that the tea we select can be finished and then blended to our exact specifications.

Knowing that we wanted to create a Genmaicha that found the sweet spot of being both refreshing and warming, and where the combination of spring and autumn flavours work to enhance each other rather than detract, we knew we needed to find a high quality green tea base. The leaves used in this Genmaicha were harvested in the spring, around mid-May. As is typical of green tea production, they are steamed to stop any oxidation and fix them in their green state (this also deepens their umami flavour). They are then rolled to reduce any moisture and dried. At this point the leaves are often graded, with the coarser or older ‘bancha’ leaves being used for Genmaicha. These leaves have plenty of richness and flavour but are either not fine enough or tightly twisted to be considered for sencha.

We've seen that Genmaicha can often have up to 70% rice – done either to cheaply pad out the tea or mask the flavour of low quality bancha.  When we were working with Wada to create our blend, he refined the bancha to a grade that delivered umami richness and a sweet finish, which works with a much more balanced 50% rice to 50% green tea ratio. Wanting the rice to enhance but not compete with the sweetness of the tea, we selected mochi gome glutinous rice, which is typically used to make sweet mochi cakes and sticky rice.  It’s been toasted until it turns brown and sometimes even pops. When blended with the bancha green tea, the mochi gome gives a sweet and toasty popcorn flavour that picks up on the tea’s sweetness and importantly balances the tea’s vegetal umami – or savouriness – giving that juxtaposition of sweet and savoury; warming and refreshing.

What is this batch of Genmaicha like to drink?

Before I sat down to write this, it had been a while since I’d had a cup of Genmaicha. I lean towards it in the cooler weather, drinking lighter green teas like Dragon Well or Sencha in the summer. Getting that first scent of sweet popcorn and rich, toasted aroma from the wet leaves I was immediately reminded how enticing this tea is. The flavour of the infusion has lots of grass and umami. Its sweetness comes mostly from the balance of the sweet finish in the tea and the toasted flavour from the popped brown rice. I can pick out a sesame oil note too – perhaps it’s there or perhaps I’m being reminded of this tea’s place in Japan, on a table alongside rich bowls of oily noodles.  The infusion feels thick and soft when I drink it, it gives a comforting, easy-going drinking experience with delicious umami and plenty of warmth.

The toasted sweetness makes this a very accessible green tea. It’s a versatile tea too – I enjoy it’s flavours across a full day. It’s rich and tasty enough to go well with breakfast (the toasted rice flavours even hint towards cereal) and the green tea does enough to give you a pleasant, refreshing lift. It’s also great for a late morning or afternoon break as the flavours would pair equally well with lots of savoury snacky foods like nuts, or even a piece of dark chocolate.

This is such an easy tea to get right! It’s one of very few green teas which needs 90 degree water. We want the heat from the water to bring out the body from the tea as this will carry the sweet, toasted rice flavour.  You’ll get warmth from the toasted rice, as well as enough richness and umami from the bancha green tea. It's super simple – add the leaves to your pot with a dash of cold water, then top up with boiling water. Remember, after three minutes, always pour out the whole infusion into your favourite cup – “Don’t forget the golden drops” as the Miyazaki’s reminded us! 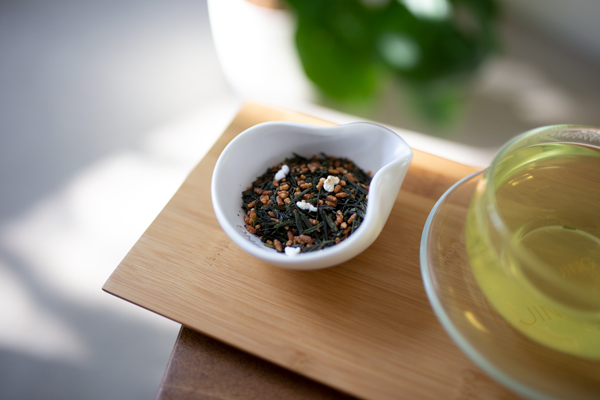 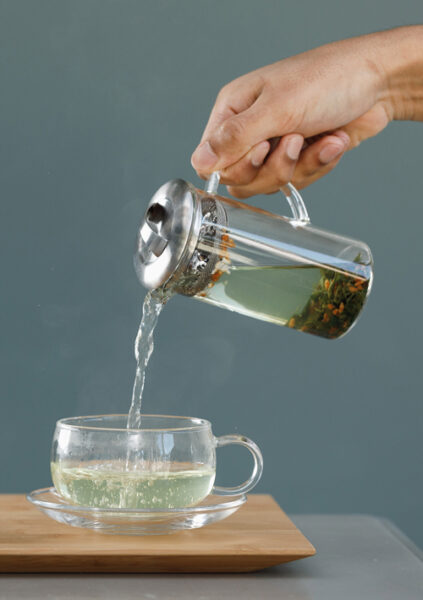 This warming, bright infusion is really easy to make well, try it for yourself

Who is Genmaicha for?

I think this tea would be a great place to start for anyone who wants the refreshment of green tea, but might have found other green teas like Jade Sword or Sencha too grassy or vegetal. With Genmaicha, you get refreshment from the green tea flavour, but the warmth and sweetness from the toasted rice. It’s also a tea for green tea lovers who want something with warmth in the cooler months.

Discover All Tea With Food