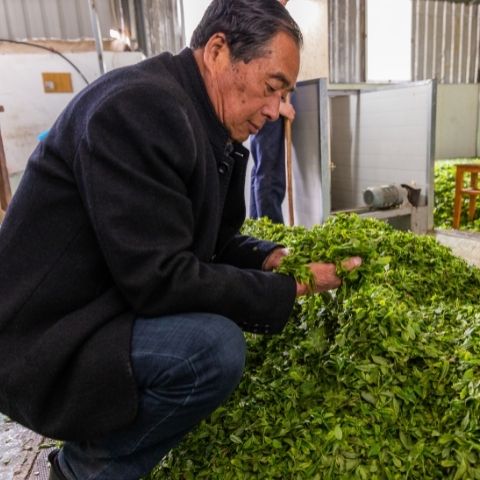 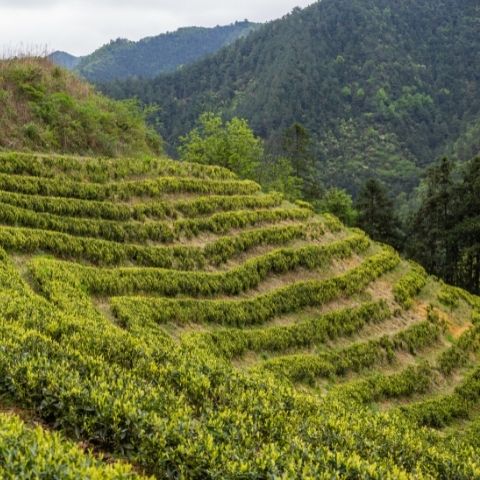 Dragon Well is China’s most celebrated green tea. It’s home is in Zhejiang, south east China but it’s known throughout the country for its fresh and nutty taste, as well as the precise craft behind the best examples.

But with so much competition in the tea producing areas of Zhejiang there has been an increase in pesticide and chemical fertilizer use, to promote higher yields and meet the growing demand for Dragon Well.

However, there are still tea producers looking to buck the trend, drawing on traditional farming techniques that work in harmony with nature, to craft the very best of this cherished tea. We think this Organic example from Lao Song does just that – with its rich fragrance, deep, nourishing flavour

Name: Dragon Well (known locally as Long Jing) refers to a mythic dragon that lives in a well near to where this tea was first produced.

Terroir: Grown in an organic garden among lush mountains and winding rivers. 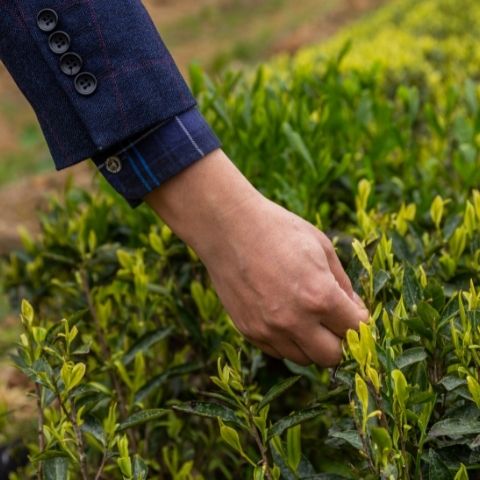 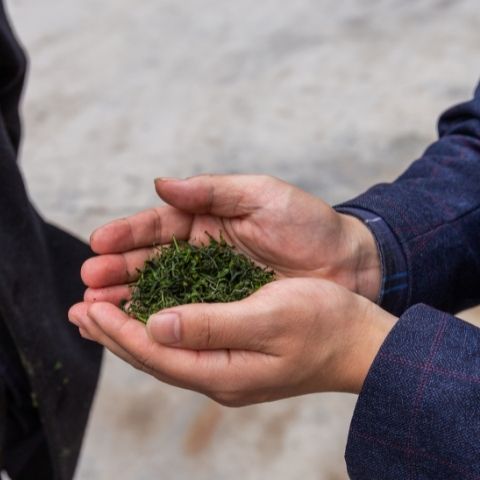 How did we source this Organic batch of Dragon Well and who made it?

This batch comes from an area of Zhejiang just outside Hangzhou City called Jiande. Nestled among mountains, winding rivers and the occasional waterfall is the lush, Organic Luocun garden. It’s home to tea maker Song, affectionately known by friends and locals as Lao Song or ‘Old Man' Song, a title he earned during tenure as village head. The village itself sits at the top of the mountain and is a small gathering of just a few houses and the tea factory.

As a local himself, Song has a big appreciation for the traditional agriculture of the area. Unlike some Dragon Well tea farmers who may prefer to use pesticides, his motivation for organic farming is firmly based on a belief that food and plants are like medicine. As well as these traditional beliefs – and indeed to keep them alive, Song is a l keen innovator,  breeding small, local tea cultivars in his plant nurseries to use in tea experiments. He also grows many other crops in his biodiverse garden, which benefit the well-being of local wildlife and its sustainability – wild strawberries, bamboo and traditional Chinese medicinal plants to name a few. This belief in the value of nature shines though in his organic green tea, as it captures the essence of his lush mountain garden, in its fresh and clear taste.

When I make this team I’m immediately hit by the aroma, it’s clean and rich with a perfect balance of cooling, almost mint-like freshness and warm nuttiness – which I know comes from the precision firing. The colour of the infusion is a glowing pale jade green, not dull or too yellowed, but reminiscent of fresh sap and sunny gardens.

The first sip is refreshing, it wakes me up with a light vegetal sweetness like asparagus or crunchy green beans. Then you get the key taste of Dragon Well – warm, roasted hazelnuts, it’s this richness and depth which sets it apart from so many other green teas. There’s no bitterness at all and all this flavour goes down so smoothly making it a true pleasure to drink. It leaves a feeling of cool refreshment, which is balanced with a deeper  satisfaction from the  layered flavours.

What is Dragon Well Tea?

If your new to Dragon Well, this is an iconic style of green tea that originates from Hangzhou, Zhejiang province. The area is not far from Shanghai and is a popular tea-tourist destination, especially during the early spring time around March and April when this green tea is being picked and crafted.

Dragon Well is typically made from the buds and two youngest leaves of the tea plant, these are the freshest parts of the plant which appear in early spring and are full of all the nutrients - and flavour – the plant has stored up over winter. There is a short window of around 4 weeks when the weather is just right to pick the very best of  these  buds and leaves. Local producers will use their intuition and experience to know the right time to head to the garden and harvest their crop – usually crisp, early mornings when the sun is warm and so the buds are growing gently but not too hot they’re turning to leaves too quickly

Once picked the leaves are withered for a short time, that just means left to rest and go supple. They are then fired in a process called sha qing or ‘kill green’. This heating phase is what stop the leaves from turning dark, and crucially locks in their green colour. Traditionally done by hand in a wok, though now usually done in small machines, this process also imparts the tea with its characteristic warm and nutty notes, as well as it’s flattened spear-like shape. 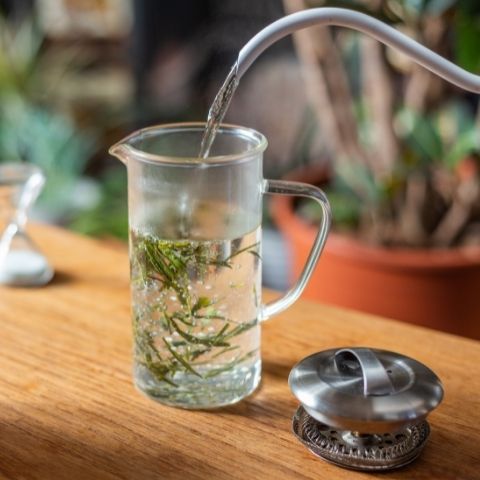 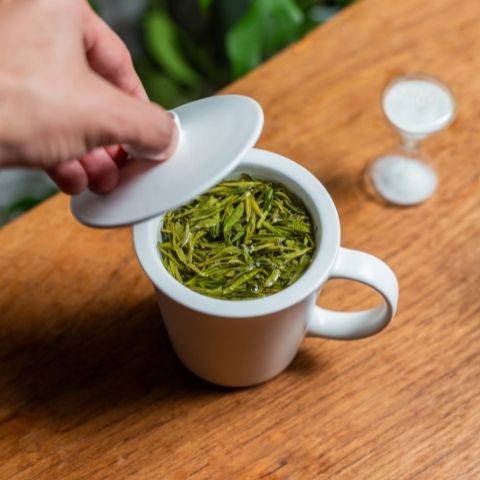 Where and when do I recommend drinking this tea?

Dragon Well is the perfect green tea to try when you want something sweet and refreshing without too many heavy, vegetal notes, like the kind you might find in Sencha or other Japanese green teas. It’s taste makes it a great tea for starting your day with. Unlike other green teas, it’s also prized for the characteristic nutty taste which go excellently with lighter breakfast or brunchy foods and salads.

How to get the best Dragon Well taste

To get the clearest flavour from this tea I would recommend using glass to infuse. The glass will heat and cool quickly which will help to balance the flavour and aroma of the infusion, without staying too hot and causing any bitterness. These medium-sized leaves will also need plenty of room so go for a teapot or teaiere rather than a strainer or ball infuser to allow for maximum taste. Pre-heating your teaware is a must too if you want to get the full fragrance when you add your dry leaves.

When you’re ready to infuse, there’s only one thing to remember and that’s to use hot water at 70˚C. At this temperature you’ll get the right level of delightful sweetness and characterful nuttiness from the leaves. Without a temperature controlled kettle you can simply achieve this by adding a splash of cold water first - roughly a 1/5 of the volume of your teapot - before topping up with boiling water,. Too hot and things could start to get bitter.

After three mintues, pour out the whole infusion into your favourite mug or glass for the perfect cup. You can re-infuse the leaves by adding 30 seconds on the next infusion to get full flavour the second time round. 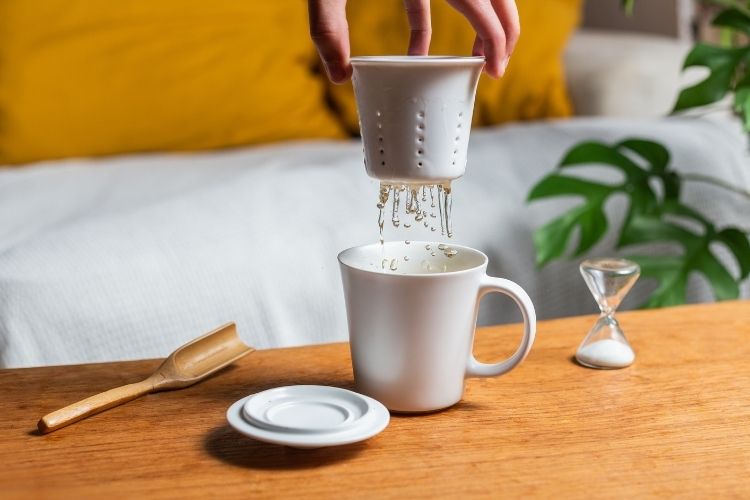 Who is this tea for?

If you’re drawn to green tea in general then this one would be a no brainer, it’s a classic tea with an iconic taste. Equally if your new to green tea and want to jump in then Dragon Well is always a good place to start, with plenty of easy, sweet notes, a smooth texture and no bitterness I would recommend it as a great way to understand how engaging and satisfying green teas can be.

An organic example of one of China's most prized green teas. Hand-picked in spring 2021 and expertly pan-fired, it's nourishing and uplifting with vivid spring-fresh flavours and roasted hazelnut sweetness.
Shop Organic Dragon Well (Longjing)