In this deep dive we get to know our latest batch of Traditional Iron Buddha, the original style of China’s most famous oolong tea. It’s one that’s becoming harder to find, but certainly a tea that we are always excited to have around.

We’ll discover why the traditional approach to crafting this tea might be dying out, as well as the great lengths we’ve gone to to uncover a masterful producer who can still create authentic examples of this rich and complex tea. Find out what makes this batch so special and how it might differ from any Iron Buddha you may have tried before.

If that sounds like youre kind of oolong then we’ll also be exploring what it’s like to drink and give you a few tips for getting the best out of these leaves, to make sure you can get the full experience at home. So let’s dive in… 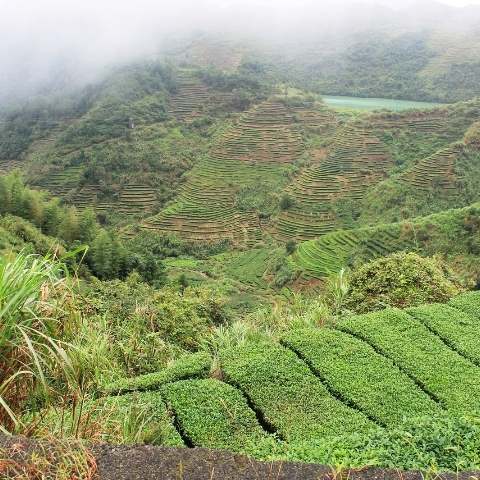 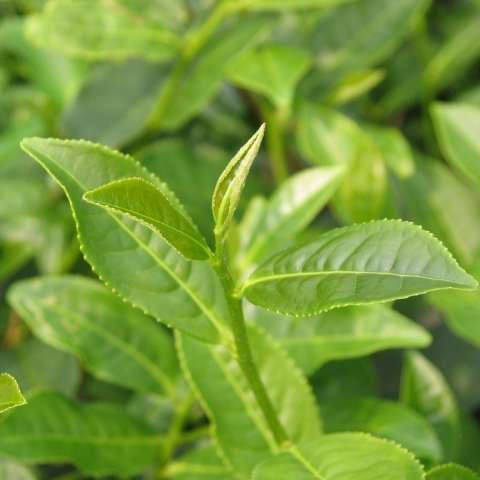 The leaves of the Tie Guan Yin cutltivar plant used to make this tea.

What kind of tea does Zhenming garden produce?

Zhenming garden lies in Anxi County of Fujian province. This area is known as the true home of Iron Buddha (called Tie Guanyin in China). A ball rolled, semi-oxidised oolong tea, which in modern times is often produced in a much lighter green style, similar to the lighter Taiwanese oolongs. This modern style makes up the overwhelming majority of Iron Buddha tea produced in Anxi County region, probably about 99% in fact. However, Zhengming is one of the very few gardens that still processes Iron Buddha in the traditional style, which is more oxidised with a deeper, more fruity and nutty taste. It’s a style that’s becoming very rare to come by and one that we have only be able to source a few times before.

Zhenming sits above 1000m which is very high by normal standards, but slightly lower in elevation and with  richer soils when compared to the other tea making areas of Fujian province. It’s also closer to the south east coast and therefore has much higher humidity coming in from the sea. Some say this is why they producers here prefer to ball roll their oolongs as they are easier to store and keep fresh in the humid weather.

How did we source this batch of tea and who made it?

This Traditional Iron Buddha was produced by tea maker Wang Changjin in May 2018, using the spring pickings of his garden’s rare heirloom tea cultivar; one that is steeped in mythology. The ‘Hong Xin Tie Guanyin’ (Red Heart Tie Guanyin) cultivar of tea plant is said to have been gifted to a peasant farmer in a dream by the bodhisattva Guanyin, a famed icon in Buddhist teachings and the namesake of both the tea cultivar and subsequent style of oolong tea.

When crafting this tea in the traditional style, the key difference is the overall processing occurs much more slowly. Notably, Changjin has to allow for a longer oxidation time and then often a heavier baking. This much more traditional approach produces a darker looking tea that is more rounded with a deeper complexity, smoothness and a fruitiness that is complemented by notes of roasted hazelnuts. Tie Guanyin produced in the traditional way is less favoured among other tea producers in Anxi County these days, as it is much more time consuming to make and requires great attention throughout the process, so finding a high quality example can be extremely difficult.

To create this specific batch, we worked with Changjin in his garden in Anxi to produce a Traditional Iron Buddha that is around 30% oxidised and has a medium bake. This profile gives the balance of light fresh flavours and darker, more complex notes. 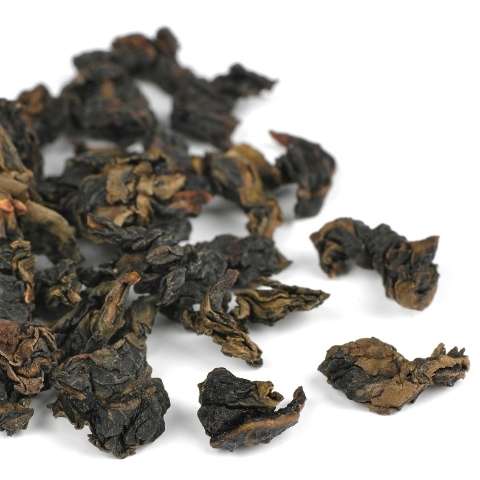 The rolled leaves of Traditional Iron Buddha which only really show their true depth once fully unfurled. 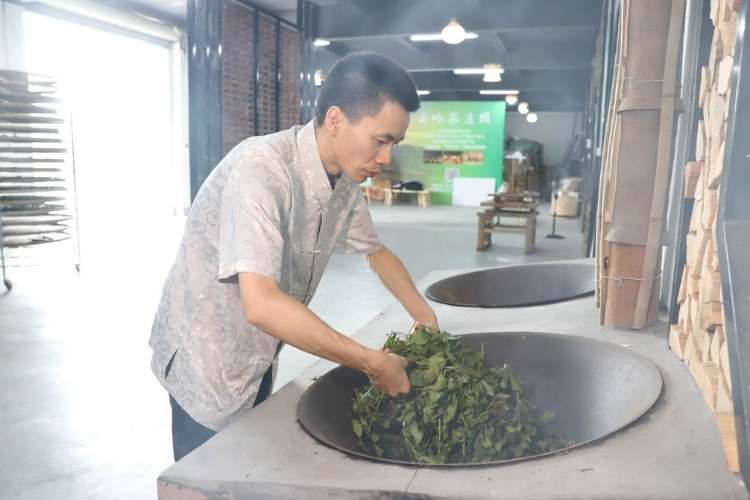 For me, one of the finest aspects of this tea is the aroma of the freshly infused wet leaves. As they’re rolled up into balls when dry, they only really show their true depth once fully unfurled. The aroma is so rich and complex with loads of notes to pick out. I found that there’s some hints of thick honey, roasted nuts, red autumn fruits, raisins and even cacao. However the taste of the infusion is quite a contrast to the modern, lighter style of Iron Buddha that many may have tried before. The flavour here is a balance of some fresh and floral notes, but with an overwhelmingly deeper and more prominent baked fruit and hazelnut taste. It’s satisfyingly rich and warming and is very smooth to drink over a few infusions. 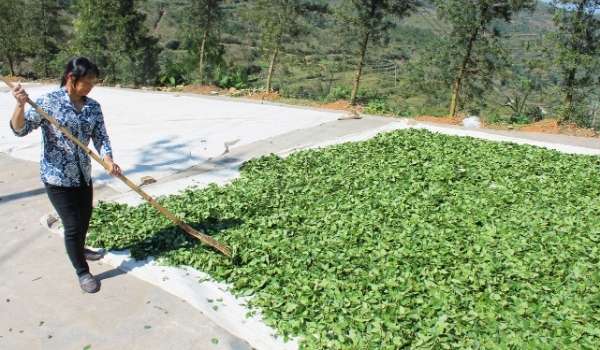 Tea leaves begin the withering process under the sun.

As this tea leans more towards some darker, nutty and fruity flavours, I think it would be perfect to enjoy on cooler mornings or over an afternoon. It has a cosy and warm feel to it that adds to the deliciousness of the infusion. There is also plenty of life in the leaves so it’s a tea that can certainly be re-infused 3 or 4 times to maximise enjoyment. You’ll find different flavour highlights though each infusion, from its initial nuttiness to its lighter and sweeter floral notes.

For ball rolled oolongs like this one, you’ll need to give the leaves plenty of time and space to open up and infuse well. This is why we recommend using a Tea-iere or a small teapot rather than a mesh or glass strainer. You’ll also want to infuse with hot water to help these leaves unfurl and ensure a smooth, rich infusion with plenty of baked fruit and nutty notes. Be sure to re-infuse to get the most out of your leaves and follow the flavours as they develop sweeter caramel notes. 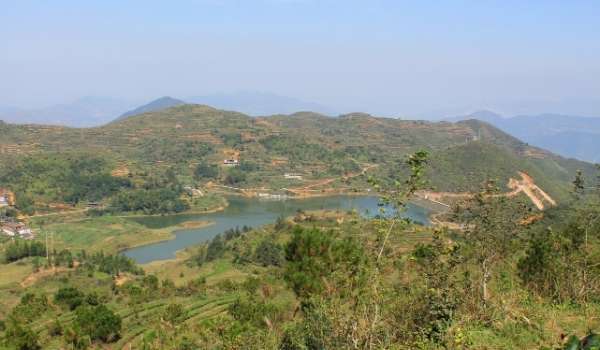 This is a classic tea for ‘gong fu’ style drinking – that is, using our porcelain Tea Master, a small teapot or a Gaiwan with a high proportion of leaf to water and preparing multiple short infusions. Making tea in this way delivers a more concentrated view of the flavours and aromas. The first infusion is light but with plenty of characteristic baked biscuit and fruit notes. As the leaves open up more slowly, the third and fourth infusion begin to pack a real flavour punch, with a long finish and plenty of complexity.

Who is this tea for?

This is a tea that will certainly please any lover of oolong teas. Particularly anyone who really enjoys the fruity and spiced notes of Li Shan or the roasted, chocolatey depth of Wuyi Oolong. I would also add that as this style of Traditional Iron Buddha is not commonly seen and growing in rarity, I would recommend trying it now as we may not find another suitably tasty batch for a while!