Japanese green tea: how you can tell Matcha from Bancha

Japan produces some of the world’s best green teas. From sencha to gyokuro, and matcha to bancha, the country is home to a rich variety of unique teas. The teas are unique not just because of their special origins – in beautiful, fertile growing regions like Kagoshima – but because Japanese tea masters process their tea differently from their counterparts in China and around the globe. 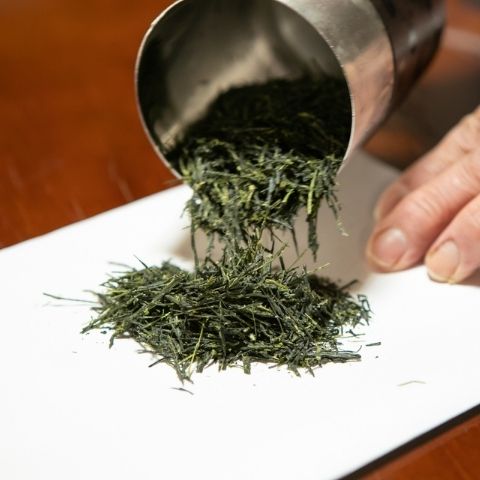 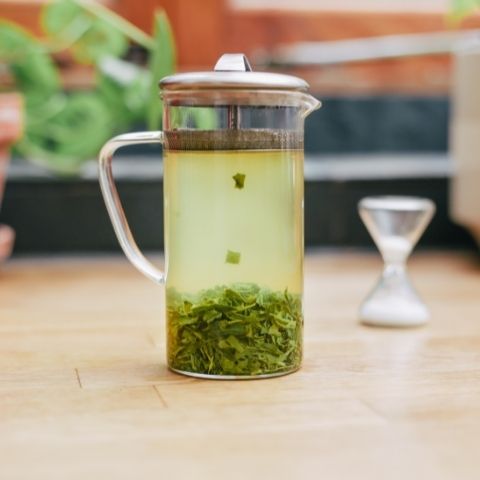 Green tea in unoxidised and has a characterstic vegetal, grassy, sweet and fresh flavour 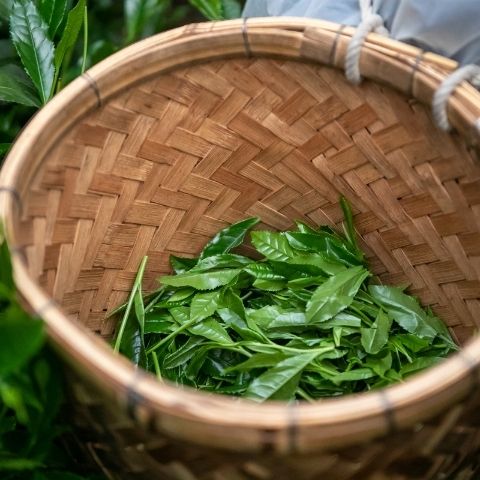 fresh tea leaves being picked during the spring in Shizuoka, Japan 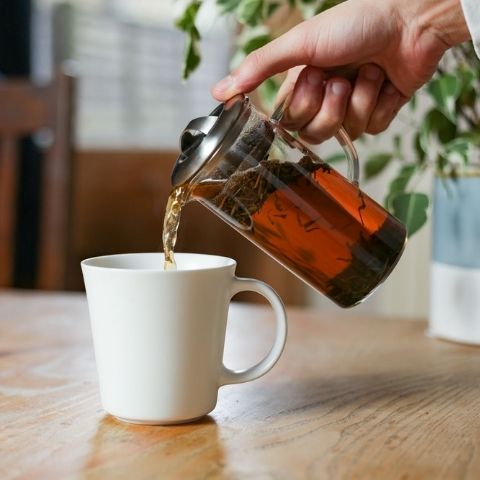 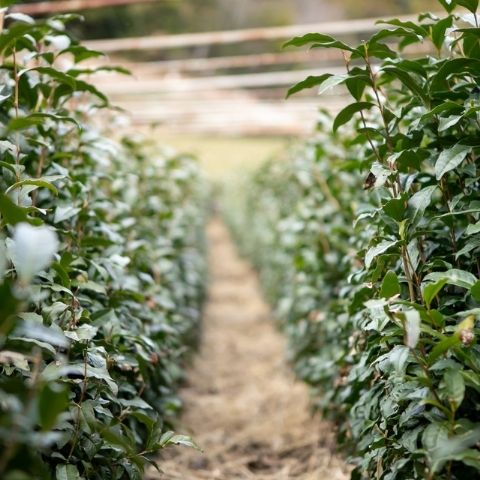 Gyokuro tea bushes are shaded under a canopy before picking, to create an even more intense umami experience 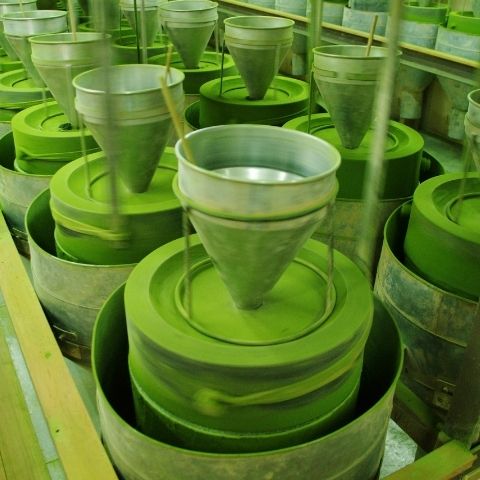 Gyokuro and sencha green tea, for example, is steamed to emphasise the vegetal taste of the leaves and bring out umami flavours. Hojicha is roasted, while Matcha is stone-ground into a vibrant green powder. Thanks to some powerful antioxidants, all of these teas have been shown to offer significant health benefits. To help you find the right one for you, here is our guide to the main types of Japanese green tea.

The six main types of tea (green, white, yellow, oolong, black and puerh) all come from the Camellia sinensis plant. It is the method in which they’re processed that distinguishes them. Five of the types undergo some form of oxidation (leaf enzymes react with oxygen and this is linked to the concentration of flavour). Green tea is the only unoxidised type of tea. As a result, its characteristic flavours are vegetal, grassy, sweet and fresh.

Green tea originated in China, but it has a long history in Japan too. Over the generations, Japanese tea growers have finessed a technique of shading tea bushes as they grow. This encourages leaves to produce chlorophyll and amino acids, delivering rich, succulent textures and very high umami. Once the leaves are picked, Japanese growers also have different techniques for what is known as ‘fixation’, i.e. treating the leaves to prevent oxidation and lock in their spring-fresh flavours.

Sencha literally means ‘steamed tea’. This method of fixation creates teas that are very different to, say, pan-fired Chinese green teas. JING Sencha comes from Japan’s biggest green tea producing area, Shizuoka. It grows on the banks of the Sasama river, is picked in May, then steamed and rolled to produce a sweet and refreshing green tea with a satisfying, thick texture.

Gyokuro is highly prized in Japan. The big difference between gyokuro and sencha is that gyokuro is shaded. JING Gyokuro, for example, is shaded in traditional style for 30 days before picking in late May. The netting that protects Gyokuro in the run-up to picking means the leaves produce lots of glutamates, which contribute to the umami flavour. If you like the sound of soft, thick umami flavours, go for gyokuro. If you’re looking for something refreshing, try sencha first.

Hojicha is different because it is not steamed. Our Organic Hojicha is flash roasted to create a mellow, soothing drink. The roasting removes any bitterness and astringency often associated with green tea. In their place, it offers a syrupy caramel sweetness and warming umami. Hojicha is traditionally said to go easy on the stomach and support digestion.

Genmaicha is a classic blend of Japanese green tea and ‘mochi gome’ rice. Our Genmaicha balances spring picked and steamed bancha tea with high quality, roasted and puffed rice, for a toasted, warming flavour. In Japan, genmaicha has historically been a hearty, rustic and enjoyable way to drink tea. 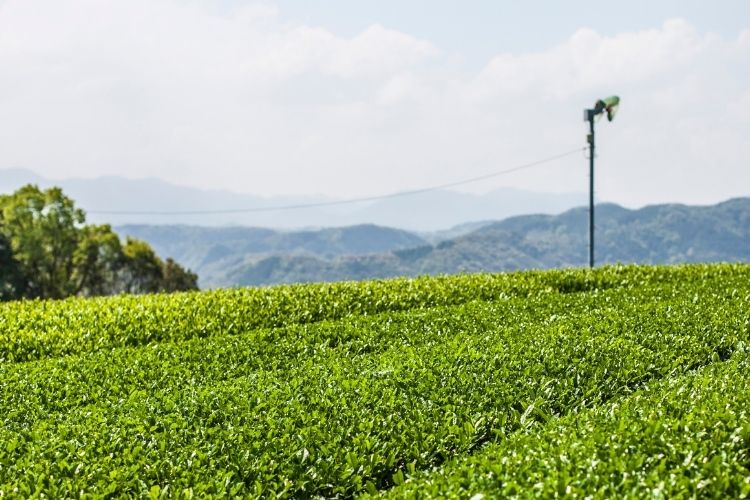 Tea bushes in Kagoshima, Japan where leaves are picked in the summer months to craft Bancha

What is matcha green tea?

Buddhist monks from China brought tea to Japan in the 8th century. These monks tended to drink steamed green tea that had been pressed into a brick for storage. Whenever they wanted to drink green tea, they broke a bit off the brick, powdered it and whisked it up into a bowl. Over the hundreds of years that followed, Japanese tea growers refined these processes to create a tea culture of their own, with matcha green tea at its heart.

Matcha powder today is made from a raw base of tea leaves known as ‘tencha’. Tencha comes from tea bushes that have usually been shaded from mid-April until harvest – this encourages them to produce more sweetening chlorophyll that also helps develop the flavour and body of the final tea. Once they are picked, the tencha leaves are steamed to ‘fix’ them in a fresh, green state. Then they are finely ground using stone mills. The result is the incredibly smooth, vibrant green powder that we know as matcha. Good matcha will always have a vivid colour and fine texture.

Matcha is the centerpiece of a Japanese tea ceremony called Chadō (‘Way of Tea’) that is considered a route to spiritual enlightenment. The ritualised preparation of ground matcha tea is at the heart of this ceremony, with practitioners spending a lifetime perfecting its gestures. Utensils are often passed from master to disciple across many generations. To offer chadō to a guest is to invite them to partake in the appreciation of the present moment.

Our small-batch JING Organic Matcha Ceremonial Grade is ground to order with traditional stone mills for an ultra-green, deliciously sweet and creamy result. It comes from Kagoshima in the far south of Japan, where ash from an active volcano makes the land fertile. As soon as our matcha has been milled in Kyoto – home to the country’s best matcha mills – it is packed immediately into airtight tins. As well as ceremonial grade matcha, it is possible to find more affordable culinary grade matcha that works for matcha lattes, if you enjoy matcha that way. 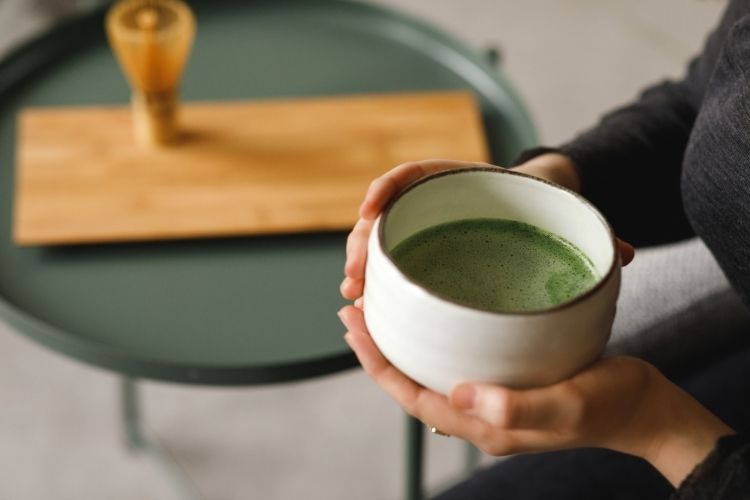 Matcha is the centrepiece of the Japanese Chado tea ceremony

What is bancha green tea?

Bancha is similar to sencha. It is usually cultivated and processed in the same way – i.e. no shading, then steaming – but bancha tends to be produced from lower grades of tea leaves. It is widely accepted that the first flush of the Japanese green tea harvest produces the finest tea. That is when sencha is picked. Bancha is often picked later in the year than sencha, so the leaves are older and less desirable. If bancha tea has been picked at the same time as sencha, it may have been produced from larger, coarser leaves on the tea bushes, which tend to be of lower quality.

Matcha vs Bancha: How are they different?

You just need to look at pictures of matcha and bancha to recognise that they are very different. As we have seen already, matcha is a very fine power with a very vibrant green colour. Bancha is simply whole tea leaves that have been steamed.

Like sencha and gyokuro, bancha tea is best enjoyed as an infusion. Just bear in mind that green tea doesn’t really like boiling water. We suggest using hot water – you can find individual infusion instructions (including temperature and time guidelines) on the packets of all of our green teas.

If you want to enjoy matcha, you have got more options. We have already mentioned matcha lattes, which have surged in popularity recently. You can also try match as a cold brew – or cold infusion. For a creamy and refreshing alternative, all you have to do is shake 1.5g of matcha with 160ml of cold water plus ice cubes.

The final thing to remember with matcha is important if you are interested in the powerful antioxidants – and health benefits – contained within green tea. Because drinking matcha means ingesting the powder of the green tea leaves themselves, it can contain up to 10 times more antioxidants than other types of green tea.