Badamtam is one of Darjeeling’s oldest tea gardens but is also one of its most pioneering. Under Subroto Sen it turned organic more than a decade ago, recently became one of the first in the region to switch from coal power to gas and is currently piloting ‘single handed’ picking machines. We caught up with Sen to find out what inspires him and why high quality, organic tea is crucial to Darjeeling’s future. 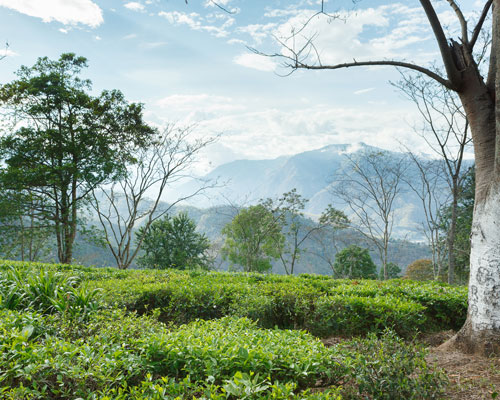 Badamtam Garden Darjeeling on a clear day. Parts of the garden have views of Kanchenjunga, the world's third highest mountain 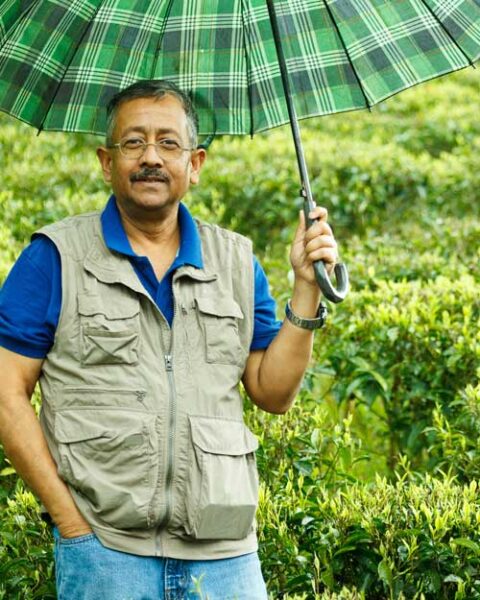 Subroto Sen, Manager of Badamtam Garden for the last sixteen years he over saw the production switch to organic more than ten years ago

Subroto Sen has headed up Badamtam Garden for 16 years. The garden itself has been around ten times longer than that – it’s over 160 years since its first tea bushes were planted. It’s been promoting women to leadership roles for more than three decades – well before even the unions were calling for this. Badamtam is also a place that has continuously experimented with new cultivars of tea bushes, including the “AV2” that’s redefining first flush flavour for Darjeeling drinkers around the world. This year alone, Badamtam switched machinery from coal to gas power and has been trialling ‘single handed’ picking machines on its hilly slopes.

Unsurprisingly, garden manager Sen is a busy man. When we speak, it’s the end of a long day of production, but Sen tells me he’s happy. He’s set up for our call in his breakfast room because that’s the one looking out to Kangchenjunga mountain – apparently it’s impossible not to feel good when the view from your home is that majestic.

“I was attracted to Darjeeling originally by the angling opportunities”

Sen spent a few years of his childhood in Assam, surrounded by tea gardens, and learnt to love nature. Wanting to “enjoy life and not spend it sitting in an office” he made tea gardens his place of work and has spent the last 34 years in Assam, the Dooars and Darjeeling.

Fed by mountain snow and annual monsoon rains, the Rangeet river runs down from the high Himalayas into Darjeeling. It’s a favourite of Indian anglers because it contains the golden mahseer, a fish that’s sometimes known as the ‘aquatic tiger of Asia’ because of its size. Sen’s caught (“and always released!”) a few mahseer in the past but now prefers the wildlife in his own back garden. “Some of the best moments are when my wife and I come back from an evening in Darjeeling town and we spot a leopard crossing the road,” he tells me.

“The butterflies, the hornbills, the scarlet minivets and even the insects have come back with a vengeance since we went cold turkey on the use of chemicals on our tea bushes.” 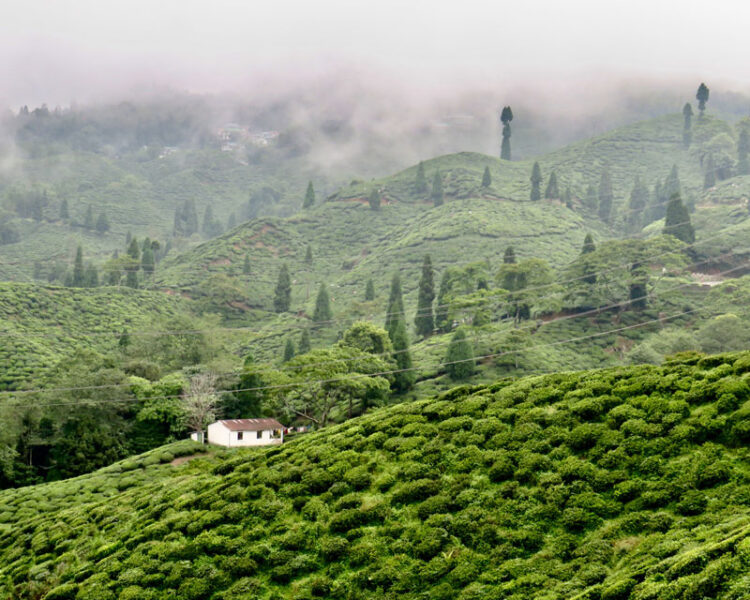 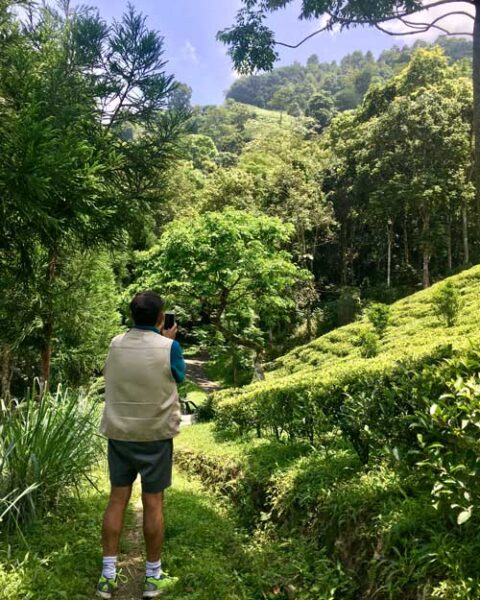 In the forested areas of the garden live wild boar, deer and even black panthers

Badamtam went “cold turkey” in 2009. Three years later, the soil, the bushes and the garden were all free of chemical pesticide and fertilisers and international bodies including the UK’s Soil Association certified Badamtam as organic. “As well as the creepy crawlies, we’ve seen the bigger animals return,” says Sen. “There are Himalayan serow, lots of deer and wild boar, and now in one of the forested areas of Badamtam, there’s a black panther. We’ve lost more than 40% of the yield by switching and our cost of production is much higher now, but it’s hard to measure what we’ve gained.”

“The bushes have become healthier and hardier – and the tea tastes better too.”

Sen is convinced the move to organic has been good for the garden and good for the consumer too. “I can’t put it into words but after tasting our tea twice a day, every day of the season for 16 years, I know it’s there. There’s more flavour and the liquor is clearer. I suppose I can say it tastes cleaner.” 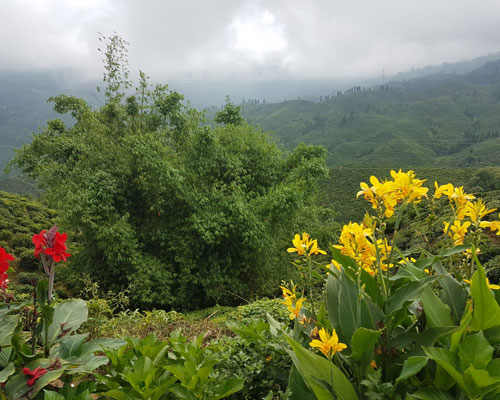 At the same time, awareness of the value of drinking organic tea is spreading. “At first organic was only popular with the international markets, but now there is more and more awareness about organic in India too. Our young people have been educated about why it’s healthier to drink, and reading about the environment on the internet means they want to support organic and are willing to pay for it – smartphones have been good for this.” But that doesn’t mean young people want to work in the tea industry themselves.

“Young people don’t want to toil in the sun and the rain; they think life is better in the city. It can be for some but, if you’ve grown up here, Darjeeling will always be your home. I think in time people return home.”

We’ve heard from other producers in Darjeeling – and also from the Miyazakis in Japan and the Chens in Taiwan – that the average age of workers in the gardens is increasing, and it’s a struggle to recruit young people into the tea industry. Sen is working hard to adapt: “We’re mechanising some parts of production, but it’s not easy because of the hilly slopes we work on. The same machinery that works on the plains doesn’t work here. We’ve been testing pruning machines and even single-handed plucking machines this year. It’ll take some time to get it right, but the work in the gardens is changing.” 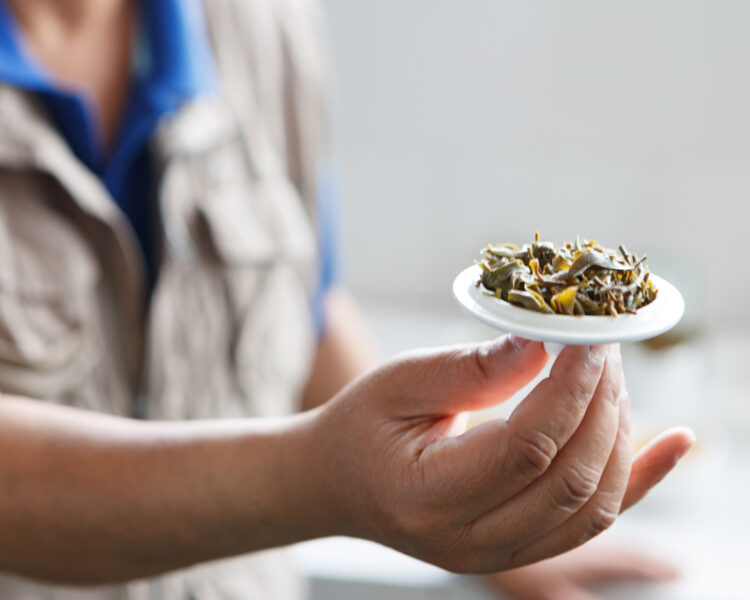 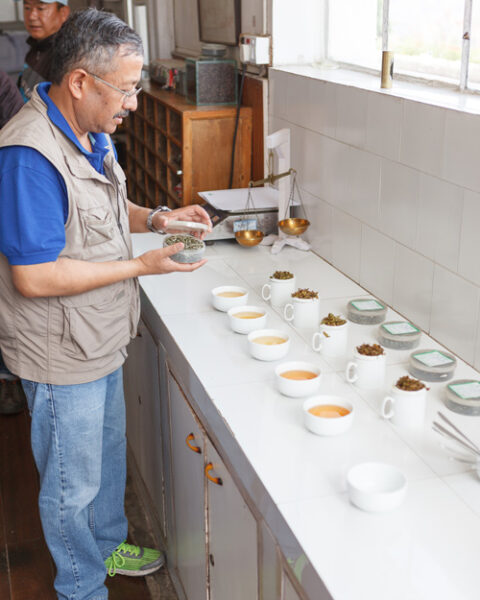 The work in the garden’s offices is changing too. “With digital payments and banking, there’s been a big push to get paperwork computerised. Education in Darjeeling is good so it’s good the work is becoming more skilled,” says Sen. “Now we need the mountain internet connection to catch up with us!” That’s when I ask Sen what tea drinkers can do to support Darjeeling.

Sen explains it best: “What we are good at in Darjeeling is making very high quality, unique teas – you cannot get our taste anywhere else in the world. Lots of tea lovers know Darjeeling is a unique place with unique taste.” Now it’s important to spread the word.

“Come to Darjeeling for the best tea, for our fun-loving culture and the best momos.”

The uniqueness of Darjeeling extends beyond its tea. High in the mountains and relatively inaccessible, it has found its own way of life, says Sen. “Darjeeling is a special place. We have huge, beautiful views of the mountains which helps. We love the outdoors, we love music and dancing – and, of course, food.” 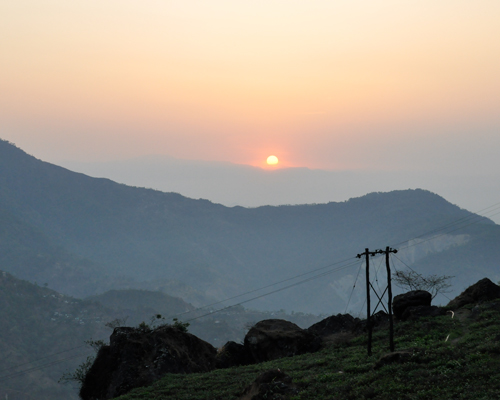 Subroto realised early on the appeal of a life in Darjeeling open spaces, connection to the mountains and so many hiking and angling opportunities

Winters are cold, so favourite local foods tend to be warming. People come from all over India to try plates of steaming momos. Filled with pork, vegetables and lots of hot ginger, these dumplings are served alongside bowls of broth and soup.

“I call it self-drinking tea – because it’s so easy to drink, it just drinks itself.”

Sen has got the taste for the new style of first flush – a lighter, floral tea that comes from the new AV2 cultivar. “It’s very easy to make – you just need good water and a good pot. We use traditional china teapots in Darjeeling and we have spring water which brings out the best flavours.”

Thinking of the best flavours, I had just one final question for Sen, as I fear it’ll be a while before I can get back to Darjeeling myself. Can I have a momo recipe? Of course, he chuckles, “I’ll WhatsApp it to you.” 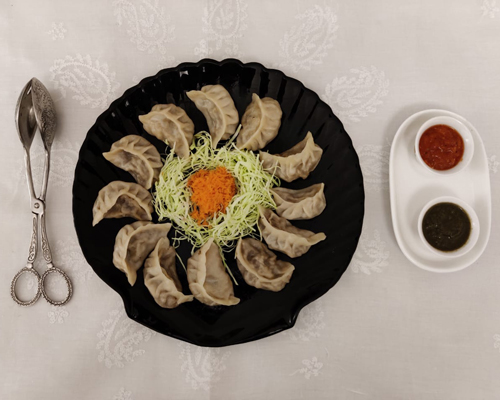 For the tomato chutney: