In misty east China, more than a kilometre above sea level, Shentang Wen produces our Organic Dragon Well Supreme. Far from any city, he’s looked after the all-natural Yong’an tea garden for 15 years. He spoke to us about what this time has taught him about living a good life and why he never considered doing anything else… 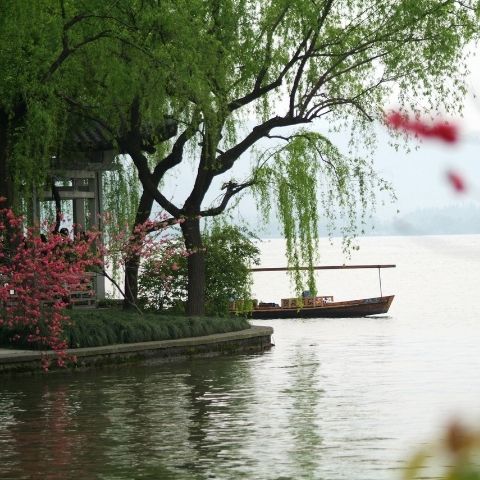 Dragon Well is China’s most famous green tea. It’s been produced in and around the beautiful West Lake area. 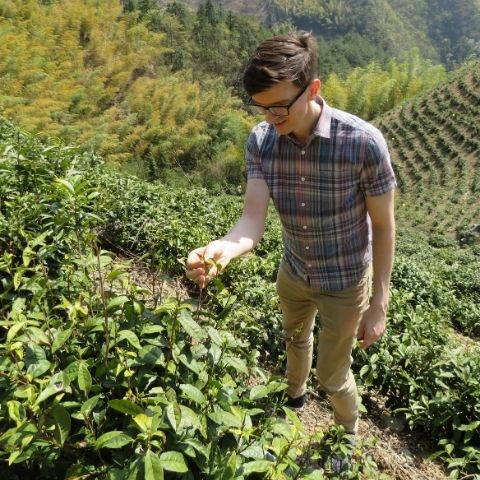 Tom in Wen's organic tea garden (Yong’an) in 2019, which is in the remote northwest of Chun’an county in Zhejiang province.

Dragon Well is China’s most famous green tea. For hundreds of years, it’s been produced in and around the beautiful West Lake area of Zhejiang province, where it is pan fired in a hot wok to bring out its distinctive flavours. Ten years ago, Unesco made West Lake a World Heritage Site, citing its profound influence on garden design across east Asia and its “idealised fusion” of the human and the natural.

In the same spirit of idealised fusion, Wen set out 15 years ago to create an organic tea garden. Back then, organic was a relatively new way of farming in Zhejiang – when Wen set up an organic cooperative in 2007, its first meeting attracted just one other attendee. Now these monthly meetings draw crowds of around 130.

Recently, Wen took time out of his preparations for the picking season to tell us how – and why – he’s trodden the organic path and what gets him through the long hours of spring.

Where are you right now, Wen?

For now, I’m with my family in a village close to the tea garden. When the season begins at the end of March, I’ll move to the garden and stay with the team next to the factory.

Whereabouts is the garden itself?

It’s in Wenjia village, which is in the remote northwest of Chun’an county in Zhejiang province. The average altitude of the garden is more than 1,100m and it’s surrounded by clouds and mists all year round – it can often seem mysterious. The whole area feels undisturbed because it’s so far away from cities and industries, but my garden is the highest one on the mountain, so it’s right on the edge of the wilderness.

And is the altitude important?

Yes. The large temperature difference between day and night causes the polyphenol and flavour compounds of the tea to precipitate and accumulate. The forest coverage rate is almost 90%, so the grass and tea trees grow between plants. I love butterflies, so recently I’ve been planting more red maples to attract them. The greenery means you can have up to 5,000 times as many negative ions per cubic metre as you would find in a city, so the air is incredibly pure and the atmosphere is quiet and elegant. 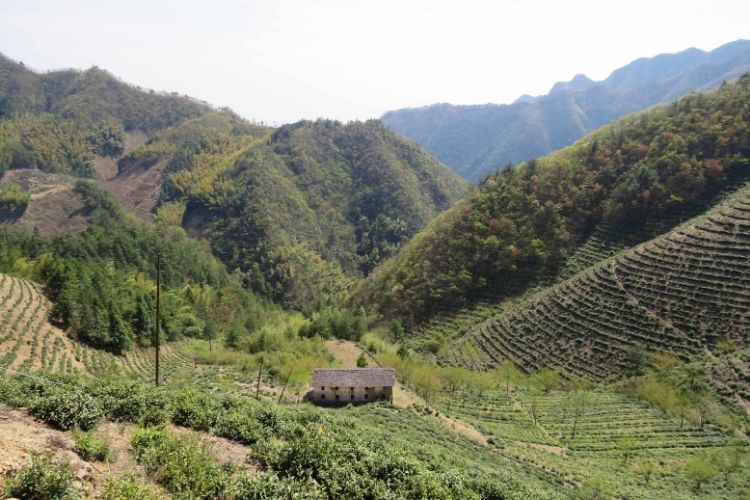 The high altitude of the garden means the season arrives slightly later, increasing the nutrients such as polyphenols and amino acids in the tea.

The altitude also means the season arrives slightly later. The extra wait increases nutrients such as polyphenols and amino acids in the tea. It allows the substances that give the tea its taste and aroma to synthesise better: the bottom of the leaves are thicker, so the taste is fresher, and the fragrance is quieter and longer lasting.

How is this year’s crop looking?

Great! Last year a drought affected the crops and leaves were much smaller. This autumn, though, the rains were good and plentiful, and the temperature not too cold. I’m expecting an excellent crop come spring.

Tell us a bit about the spring picking season…

The days are very long, which is why it’s easier to stay at the garden. The season usually lasts around four weeks and, once it’s over, there’s a big party. Everyone from our garden and the neighbouring gardens gets together, drinks baijiu and chats late into the night. 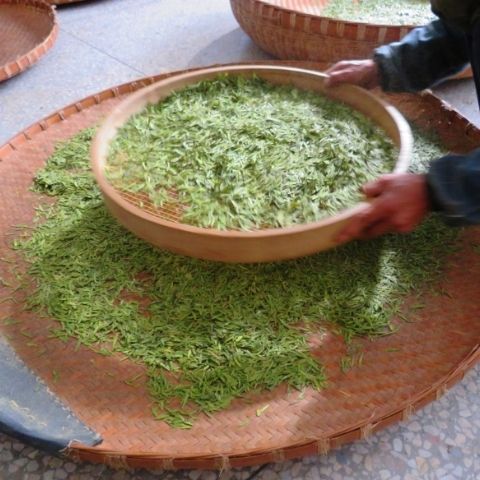 Wen sorting through the leaves in the factory. 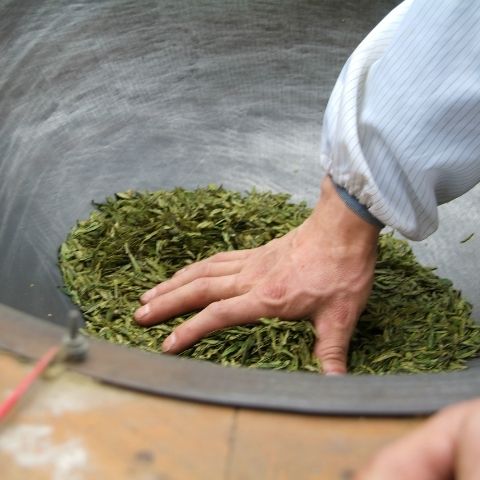 After being hand-picked and lightly withered, the tea is pan fried, traditionally in a wok, to prevent oxidation and develop a distinct sweet chestnut flavour.

What does the work involve?

I get up at about 5am and arrange the picking of the specific tea varieties, the area of the garden to be picked and the picking standards with the foreman. Tea picking starts before 6am – more than 100 tea pickers go up the mountain every day during the season. The first batch of green tea enters the factory around 11am. Tea frying times are set according to the tenderness and water content of the fresh leaves. Around 4pm, the second batch of green tea enters the factory. The second batch of frying continues until the evening. During the really busy times, I’m often frying tea into the night. The next day, I do the final panning on the tea that was fried the day before.

Do you get any time to relax before the end-of-season party?

There’s not much downtime during tea season, but I do make space for three tea drinking sessions a day: when I wake up; after lunch; and before bed. In the evenings, I spend time with other local tea farmers who are also sleeping close to their farms.

What does everyone do for the rest of the year?

Some of the 100 pickers travel from next-door Anhui province just for the peak season, but most of them are locals from the surrounding villages. For the rest of year, there’s still lots of work adding fertiliser or cutting grasses. Some other local gardens will make tea oil from the seeds of the camellia plants and there is a small walnut industry in the area to keep everyone busy throughout the year.

Is this the life you always envisaged for yourself?

This is my family’s calling. More than 30 years ago, when I was still a teenager, I learned from my parents to make tea. My ancestors were tea makers and I have always had a deep affection for tea. I’m passing the skills onto my son and daughter-in-law, though I don’t want to stop myself. Every day I’m on this earth, I expect to be making tea. I have been dealing with tea for most of my life, so it’s like a family member to me. 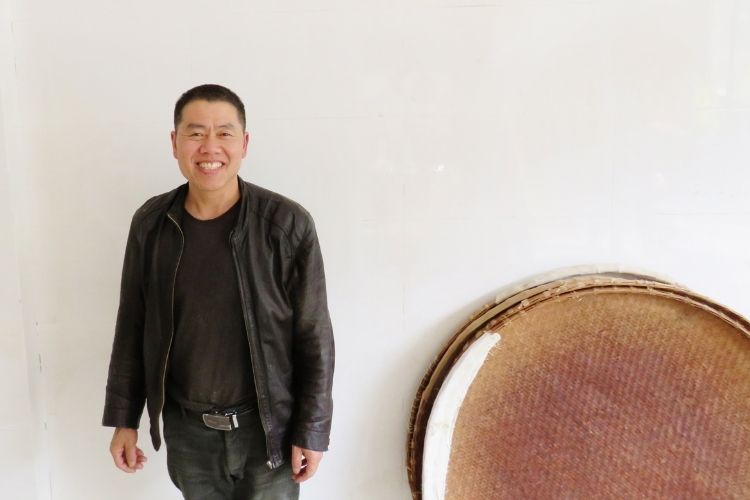 'You can only live a good life by slowly doing good work, one step at a time & working hard', says Wen. I know this because you can't make tea in a hurry. 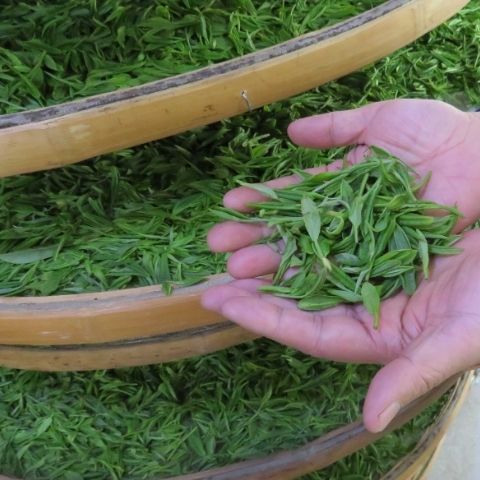 As a family member then, what has tea taught you?

You can only live a good life by slowly doing good work, one step at a time and working hard. I know this because you can't make tea in a hurry. Each step has a specific time and a specific temperature for picking and frying to drying. You have to follow the steps. If you rush, it’s easy to spoil the tea and lose its value. To make tea, you have to be willing to endure hardships, get up early and stay up late, and work hard for the finished cup of tea. It’s not only tea that’s like this – life is too.

Is there anything else you’ve learnt along the way?

Make many friends! Especially if you’re working on something new, like organic was when I started this garden. I set up a local organic cooperative and only one other person turned up to the first meeting. These days, around 130 people travel to those meetings and they all share ideas about everything from processing techniques to dealing with new weather patterns. Membership increases every month, especially this year as demand for organic tea has grown hugely in China.

When I first started working organically, there was a very limited domestic market, so I had to look to places like Germany, the UK and the US to sell my tea. But this means I now have many friends across the world and they bring me new perspectives and interests. I believe people who care about organic and about the earth have a better attitude to life!

Organic is not the norm in tea production. Why did you decide to go organic?

When I came here 15 years ago, I insisted on going organic because I had seen the first signs of a market for organic in the tea markets of Shanghai and understood the benefits. Back then, organic was a relatively new way of farming in this area and I realised my only option was to start something new. I found some land that was close to other tea gardens, but a little bit higher up the mountain and less accessible. There were lots of plants growing happily, which told me a garden could work. And because it’s at the top of the mountain, the garden wouldn’t be affected by chemical runoff from other gardens. Today, I remain committed to making organic tea in this pure, protected, natural tea garden.

Do you think organic might become the norm for tea in the future?

Right now, organic tea is a sunrise sector but, as consumers pursue higher food quality, I think organic tea is the future of the industry. Everyone likes healthy products. 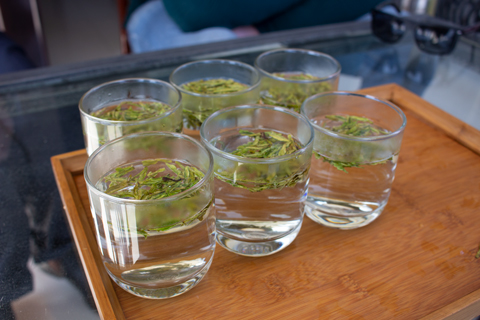 Dragon Well made Grandad style - try dropping a few leaves in a glass, topping up with hot water and sipping it slowly. It's how Wen an the locals do it in Hangzhou.

Finally, Wen, how do you drink your tea?

I like to drink my own Dragon Well, brewed ‘grandad style’ in a tall glass cup. The flavour is rich and the aftertaste is full of sweetness. That’s typically how all of us drink tea here, unless it’s a special occasion – or a special tea – in which case we’ll get the gaiwan out and settle in for a longer session of gong fu-style brewing.

Every tea producer we work with is an accomplished master craftsman with a wealth of expertise that enables each of them to create their unique tea. Meet some of the makers behind our other teas.