Gyokuro vs. Sencha: What’s the Difference?

As the weather gets warmer and we enter spring, my taste for tea begins to lean toward the refreshing and bright taste of green tea, especially those from Japan, where green tea is the focus of their early spring harvest. The fresh, grassy flavours of teas like Sencha and Gyokuro compliment the shifting weather so well, plus they have plenty of richness and umami depth that’s still invigorating during the cooler mornings. To really explore these icons of Japanese tea I decided to put them head-to-head to see how they taste, and which one might be for you. 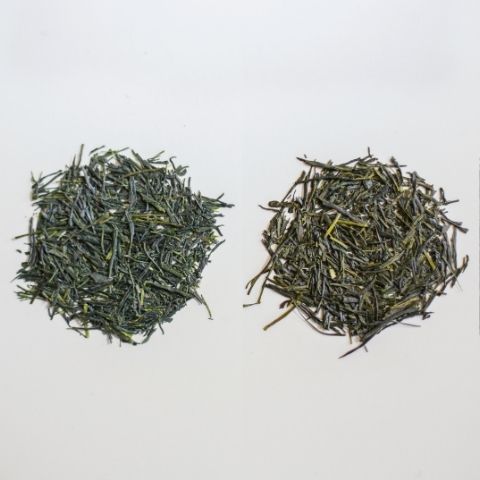 In this piece we review two similar looking Japanese green teas, Gyokuro (left) and Sencha (right), to understand the key differences and what they taste like. 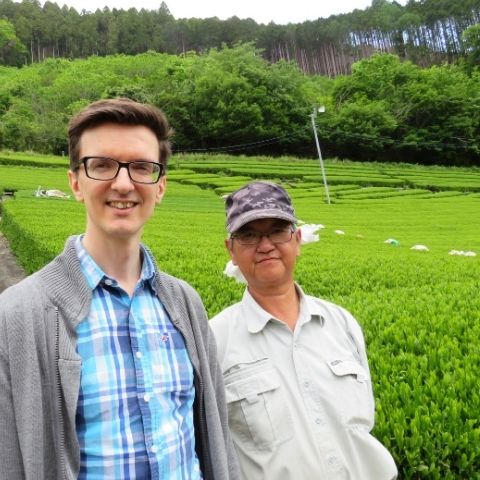 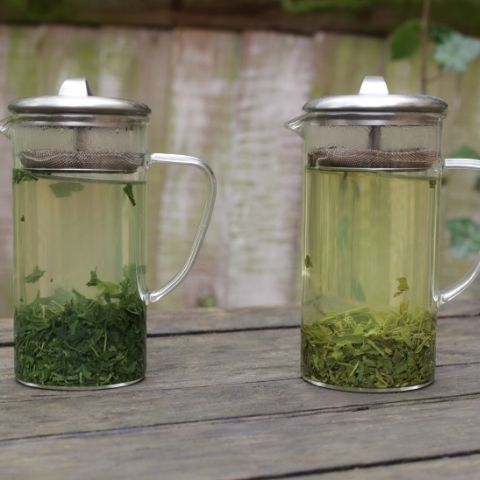 When comparing the taste of these teas, you'll find Sencha (right) has plenty of grassiness & floral sweetness, whereas Gyokuro (left) is richer & more intense. 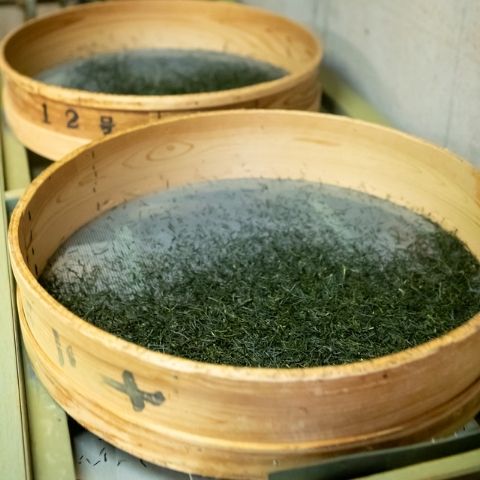 Our Sencha is steamed to halt the oxidation of the leaves, locking in their green colour and promoting a grassy, umami flavour.

Gyokuro is also steamed, but the tea plants are shaded from sunlight for a month before harvesting, resulting in more complex sweet & umami rich flavour.

This is a follow-up to one of our most recent tea comparisons, where we looked at the differences between Chinese and Japanese green tea. If you’re new to green tea and haven’t read that piece, then I would recommend starting with that first to get to grips with what makes Japanese green tea so unique.

We’re going to dive a little deeper into Japanese tea in this comparison. So, if you’ve ever wondered what the names of the teas mean, how each tea is made, or what flavours to expect in your cup, then this will be the perfect guide to help you better understand these Japanese green teas.

Sencha vs. Gyokuro: Get To Know Them

Both teas incorporate innovative techniques during their harvesting and processing, which helps give them their characteristic sweet, grassy and umami-rich flavours.

Let’s start with Sencha, which is quite a traditional green tea as far as Japan is concerned and one that’s also the most popular kind of green tea produced in Japan. Our current batch of Sencha, which translates as ‘steamed’ or ‘simmered’ tea, was produced in spring 2019 by tea maker Yoshiro Okamura in Sasamodo gardens in Shizuoka, Japan. This style of green tea evolved from the method of using steam to halt the oxidation of the leaf, locking in the green colour, and promoting a grassy and umami-rich flavour. Further innovations in cultivating unique varieties of Japanese tea bushes have led to an even more pronounced umami flavour, deep green colour and a characteristic taste for Japanese green tea.

Our Gyokuro batch was also produced in spring 2019 by Mr & Mrs Miyazaki in the Asahina Valley of Shizuoka, Japan. Gyokuro, meaning ‘Jade Dew’, is also a steamed tea like Sencha, but the innovation here comes through a farming technique where the tea plants are shaded from sunlight for a whole month before harvesting using a canopy of thick straw. To explain how this causes a change in flavour, I’ll explain some quick tea science. As the tea plants react to a sudden lack of sunlight, they produce more chlorophyll giving the leaves a deeper green colour. The chemical compounds that usually convert during photosynthesis (the reaction plants use to turn light into food) are also preserved. This means the rich taste of amino acids, such as the chemical compound L-Theanine, become more concentrated in the tea leaves. Gyokuro therefore has an almost opaque infusion with a distinctly pronounced sweetness and incredible umami depth, making it the jewel of Japanese green tea. 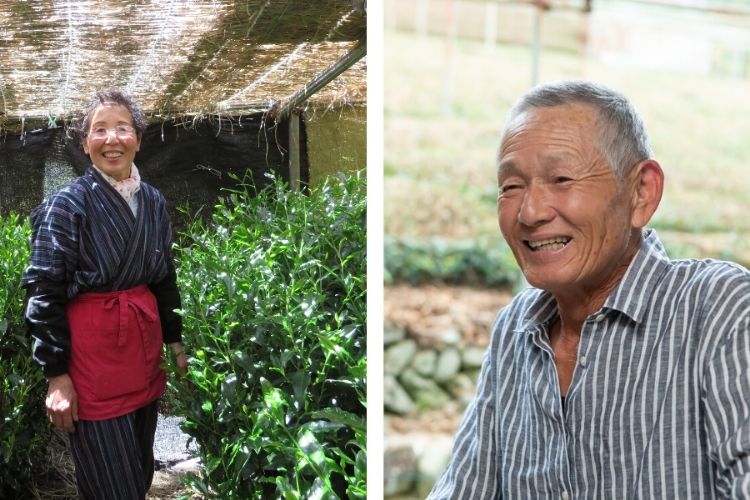 Making Gyokuro tea is a family affair high up in Asahina Valley in Shizuoka, Japan, for Mr and Mrs Miyazaki.

Sencha vs. Gyokuro: How We Like To Make Them

For the taste test I infused both teas using our glass One Cup Tea-iere with 4g of leaf to 250ml of water. I also made sure to pre-heat my tea-iere with some hot water, as this helps to release the aroma when you add the dry tea leaves. Aroma is a key part of tasting these teas, so it’s something that’s definitely worth doing.

When infusing the Sencha, I used the recommended 70˚C water, so slightly cooler than boiling, while for Gyokuro I went for an even cooler temperature of 60˚C. Using cooler temperatures for these teas ensures a balanced extraction and full flavour without any bitterness or astringency. Both teas were infused for 3 minutes and when the time was up, I made sure to pour out every bit of the infusion for maximum flavour, or as our Gyokuro producer Mrs Miyazaki says, “Don't forget the golden drops!”.

At first glance these two green teas look very similar with long and thin dark green leaves. To the untrained eye it might be hard to even tell them apart, so you might assume that the taste would be remarkably similar too…well let’s find out.

Aroma – I started with the Sencha, which was instantly grassy with notes of sweet, fresh vegetables like buttered peas and crunchy green beans. The aroma of Gyokuro was even more complex with a strong note of steamed sweetcorn and thick cream, which reminded me of a custard cream fondant! Both had lots of vegetal aroma, but where Sencha is rich and grassy, Gyokuro is sweeter and creamier.

Taste – Sencha has a grassy sweetness, with notes of fresh green veggies creating that all-important umami and bringing a nice balance to the infusion. The Gyokuro was more intense, with even sweeter floral notes and a more savoury, buttery flavour. Both had plenty of characterful umami, but Gyokuro is much richer.

Texture – Sencha is remarkably smooth and thick, with the texture helping to elevate the richness of the infusion. But with Gyokuro it’s even more so, and you can see the thickness of the infusion in its translucent, almost milky appearance.

Finish – The finish on both the teas is long-lasting, with the sweetness and umami staying present in the aftertaste. Though the Sencha retains more of the high notes, while the umami from the Gyokuro remains for much longer at the back of the throat.

Feeling – The Sencha left me feeling refreshing and enlivened, while the Gyokuro was much more of a complex experience that made me want to sit and focus on the tea, creating a relaxed but present feeling.

To summarise, I think Sencha is a great tea for anyone looking for a richer infusion from their green tea, with plenty of freshness and a balance of umami character. But if you want a more complex infusion to focus on, with high sweetness and deep umami, then give Gyokuro a try.

If that’s got you intrigued, then you can dive even further into the world of Japanese teas by checking out more entries on our Journal. You can also meet the producers who make the teas to discover even more about their origin and flavour. 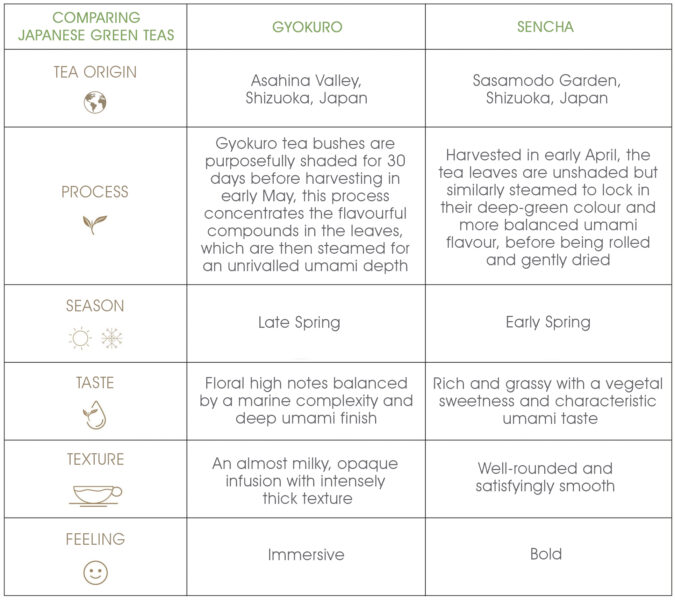