Each year there is a fresh crop of seasonal teas that enter the range and cause a stir among tea explorers such as myself. From the nutty Dragon Well green tea of Zhejiang, China, to the crisp First Flush from the Himalayan foothills of Darjeeling, each one reminding me of the bright taste of a truly fresh tea, while always evolving in flavour from batches of previous years (or, perhaps that’s my taste developing more than the tea itself). However, there are times when the joy of experiencing a new tea seems to slip from our grasp, for whatever reason, and each year, White Peony has been one of those teas, until now…

In this deep dive we get to know our latest batch of Organic White Peony, a fresh and soothing white tea produced by Mr Yang from Dahei Garden in Yunnan Province, China. This is an ancient terroir that’s probably more renowned for its earthy puerh and malty black teas, but nevertheless it’s a region that is beginning to consider itself, much like wine in the west, as the ‘new world’ of white tea.

The prestige of white tea means that each Spring, fresh batches have been commanding higher and higher prices, especially those from Fuding County. So, we’ll look at why we chose to venture from one end of China to the other in search of a Spring 2020 White Peony. We’ll also share the process of how this tea is crafted and how it might differ from others you may have tried, plus we’ll give you the best tips on how to get great taste from these leaves at home. 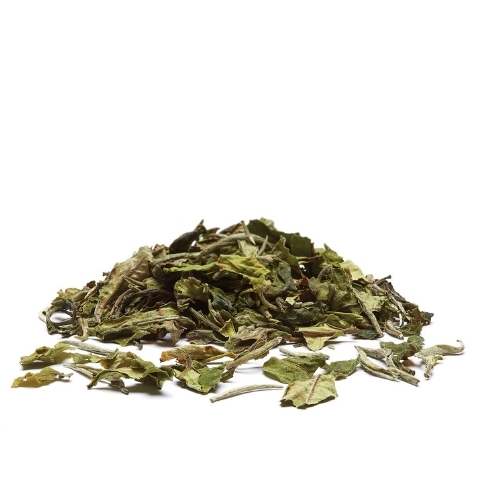 Our latest batch of Organic White Peony - notice the combination of silvery buds and yellow-green leaves. 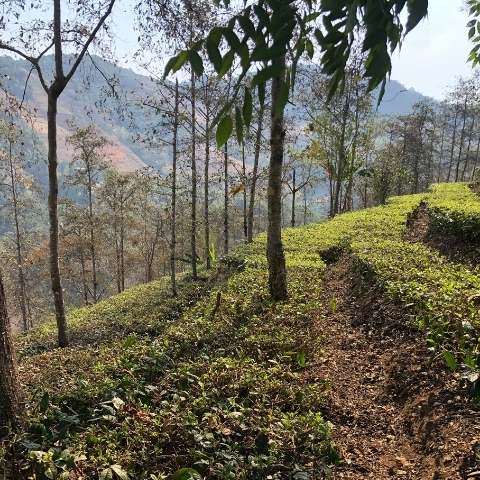 What kind of tea does Yunnan produce?

Yunnan is China’s most south westerly province, an ancient area of China for tea cultivation that is widely regarded for being the home of puerh, a complex, provincial style of tea that is known for its ability to develop new flavours as it ages. Malty and chocolatey black teas are also a Yunnan speciality, partly out of necessity to meet the needs for tea export during the second world war, while tea production in the south east of China suffered. The ancient, dense forests that cover Yunnan’s mountain ranges are also home to some very old tea trees, which unlike a more common tea bush, are tall trees of 20ft or more and are often referred to as ‘gushu’ or, ancient tree and can be over 500 years old.

White teas such as Silver Needle, which uses only the buds of the tea plant and White Peony, which uses the buds and two young leaves, are relatively new styles of tea for Yunnan. Although they’re certainly taking root throughout the province with a new approach to this mellow and refreshing style of tea. The terroir also benefits from being heavily protected by local government, with many of the ancient high mountains that cover the region imposed with strict regulations on the use of pesticides and chemical fertilizers. This means that organic certification and potentially higher quality assurances are much easier to achieve in Yunnan than some of the more famed white tea regions of China.

Dahei Garden itself lies within Menglian county, a high mountain area of Yunnan province that is home to ethnic minority groups, such as the Dai and Lahu people who have populated the province for millennia. Here Yang Encan grows the Yunkang varietal of tea bush, a Yunnan speciality, which is known for producing large, thick buds and tender young leaves, making it a great candidate for producing sweet and refreshing White Peony. 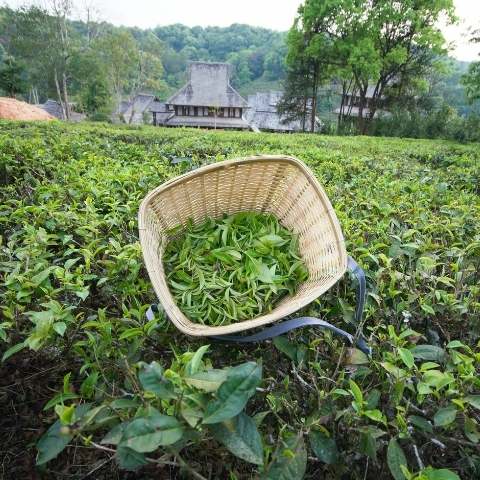 How did we source this batch of Organic Yunnan White Peony and who made it?

Each year the hunt for exceptional white tea becomes more and more difficult. Often our journey begins in Fujian province in the South East of China, an area considered the authentic home of white tea for its exceptional tastes and quality. But unfortunately, as notoriety goes up, so does the price and often the need for higher supplies, which in turn can lead to the use of pesticides and other chemicals. These higher prices are certainly a reflection of quality and authenticity, but in recent years they have reached astronomical proportions, putting them out of reach for many tea drinkers.

As the popularity of white tea grows within China, other origins are beginning to adopt white tea production, trying to capture and explore this quintessentially fresh and mellow style of tea. From Guizhou to Guangxi province, farmers in these regions are considering themselves as the ‘new world’ of white tea vs. the ‘old world’ of Fujian province. So rather than being down on trying to capture the most ‘authentic’ of White Peonies, for us the prospect of exploring new teas is quite exciting. 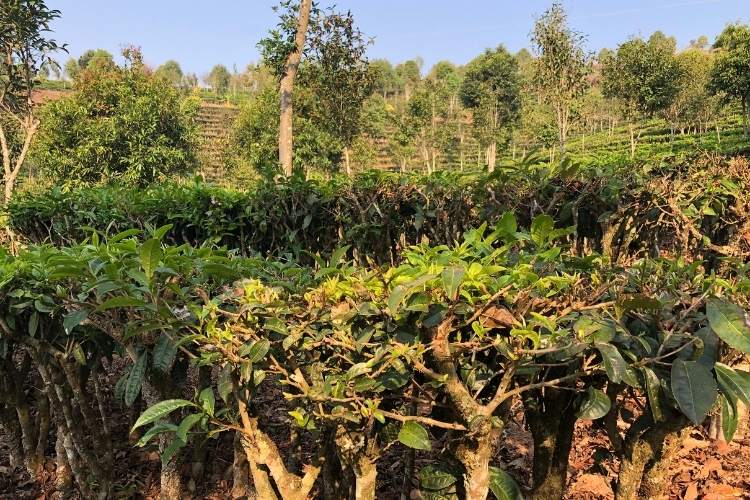 Though, after searching throughout China and even Taiwan, most of these other origins still try to mimic the styles of white tea made popular in south east China using similar cultivars and methods. But where others were trying to blend in, Yunnan province stood out as being unafraid to experiment. Ultimately this led us to tea producer Yang Encan of Dahei Garden, who much prefers to use the local knowledge and tea cultivar, Yunkang, for his white tea. His tea offers something different, its own flavour, representing a more unique interpretation of White Peony.

To craft his White Peony, Encan uses a method unlike that for other types of tea, which may involve rolling, frying or baking the leaves. By comparison you might say the process for making white tea is much simpler. In early spring Encan and his team will hand pick the new buds with two young leaves (which distinguishes this as White Peony) from his flourishing tea bushes. They then leave them to wither before allowing them to fully dry. During the process Encan will be using his years of expertise and intuition to know when the leaves are ready, assessing the conditions of the leaves and the weather, as well as being extremely careful when handling the tea. For white tea, the leaves don’t go through a heating phase to stop any oxidation, so any mishandling may bruise the leaves and cause unwanted oxidation which would greatly affect the flavour of the tea.

The results are something recognisably fresh, sweet and indicative of White Peony, but with a flavour all its own…so let’s see how it really tastes. 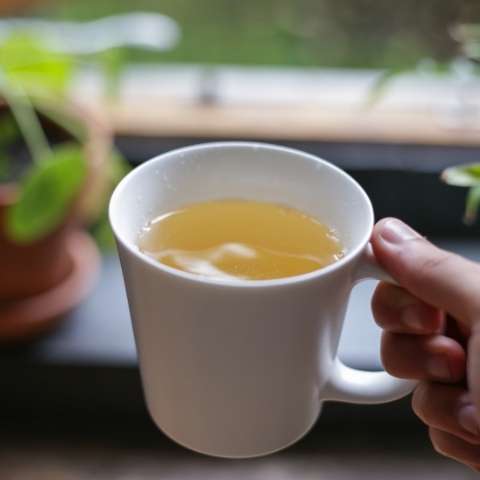 Organic White Peony has a syrupy, mellow infusion with a distinct fruitiness.

The first thing that hit me when infusing this tea was the aroma of the leaves. Typically, White Peony is meadowy and floral, but here there is a distinct fruitiness, something almost like dark berry fruit and much more of a woody depth which is really intriguing. The infusion itself is thick and syrupy, with a mellow feeling that allows the flavours of the tea develop really well. There are distinct notes of rosebuds and more of that berry flavour, turning to an almost tropical fruit finish and plenty of woodiness to round out the infusion. This complexity is a distinct characteristic of White Peony, where the addition of the young leaves to the silvery buds adds structure and depth of flavour, making this tea appeal to those looking for a tea that’s soothing and has full refreshment but doesn’t compromise on taste.

As with most white teas, this tea is considered cooling in China and therefore drunk mostly during the spring, encapsulating the freshness of the new harvest season and offering respite from the hotter weather. However, I would say that this White Peony is so calming and refreshing that it would be the perfect lighter infusion to enjoy as we head into Autumn and beyond. The depth of flavour available from the leaves means that there’s plenty of that spring sunshine in your cup to keep you going through colder weather. 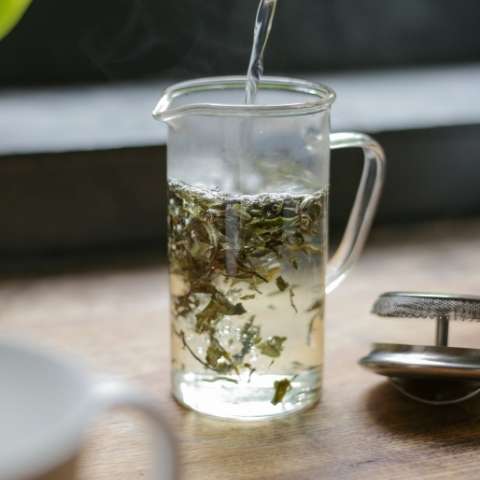 Infusing with a lower temperature water ensures plenty of refreshing berry sweetness in your cup. 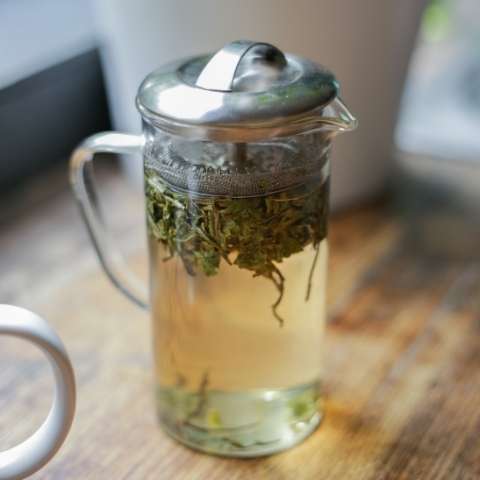 The perfect tea for a relaxing infusion with hints of complexity.

For this tea you’re going to want to indulge in the full aroma of the leaves, so make sure to pre-heat your teaware by swirling some hot water around the pot and discarding before adding in your leaves and enjoying the fragrance. I’d also recommend a slightly cooler temperature for this – around 80˚C to ensure plenty of cooling, berry sweetness and complexity without getting too heavy. Glass infusers are really good for white tea to ensure that the tea cools evenly and helps to avoid over-infusion. Other than that, be sure to give it the full 3 minutes for a full flavour and smooth, mellow texture.

Remember, after three minutes, pour out the whole infusion into your favourite mug for the complete, perfect cup. You can certainly infuse the leaves again too and the second infusion should have even more of that rose sweetness and floral quality to it, just add 30 seconds when re-infusing for a consistent flavour.

This is a great tea for ‘gong fu’ style drinking – that is, using our porcelain tea master, a small teapot or a Gaiwan, with a high proportion of leaf to water and preparing multiple short infusions. Making tea in this way delivers a more concentrated view of the flavours and aromas, which for this tea means a light sweetness and hints of complex woodiness in the first infusion, much more of those hints of tropical fruit coming through in the second infusion and a full rose flavour in the third Infusion. This tea maintains a syrupy, thick texture throughout and is definitely one that deserves to be fully explored and enjoyed for the unique qualities imparted by the Yunnan terroir.

Who is this Organic Yunnan White Peony for?

This is a tea for anyone who prefers a relaxing and easy-going infusion, like Jasmine Silver Needle or even lighter green teas like Jade Sword, but is perhaps looking to explore something with a little more complexity of flavour. I would also recommend this tea to more seasoned drinkers of white teas like Silver Needle Supreme, who may prize the origin of their leaves, but are open to being rewarded with new tastes from a different terroir.